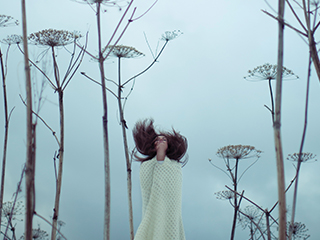 Libretto: Alexander Medevdev Based on the novel The Passenger in Cabin 45 by Zofia Posmysz

For the first time in Israel! The mesmerizing opera about women prisoners from all over the world, transported to Auschwitz where they try to remain human and humane in a place that has lost all human form.

The project is organised in co-operation with the Adam Mickiewicz Institute. Financed by the Ministry of Culture and National Heritage of the Republic of Poland as part of the multi-annual programme NIEPODLEGLA 2017–2022.

Act I
The early 1960s, on an ocean liner. Watching over the scene is a chorus who sometimes takes part as prisoners, passengers or officers, and sometimes are merely onlookers from another time, as are we.

Scene i
A German diplomat, Walter, and his young wife, Lisa, are on the way to Brazil where he will take up a diplomatic post. Suddenly she sees a fellow passenger who she thinks she recognizes, except that she knows that person to be dead. Under the shock of this encounter, she reveals to her husband for the first time that she was an SS overseer in Auschwitz. The revelation is a crisis for both of them.

Scene ii
In the camp, we learn hat the “Passenger” is Martha, a Polish prisoner who Lisa Franz, the overseer, has marked out as someone who could help control the other prisoners.

Scene iii
In the female barracks, we meet women from every corner of Europe brought together in this cosmopolitan hell. A suspected Russian partisan, Katja arrives from a brutal interrogation, and the Kapo finds a note in Polish which may implicate her. Lisa orders Martha to read it, and Martha coolly renders it as a love letter – as if to her own fiancée, Tadeusz, who she believes is also a prisoner.
Back on the boat, Lisa and Walter try to come to terms with this new background to their relationship.

Scene iv
Under Lisa’s supervision the women are sorting belongings looted from the prisoners. An officer arrives demanding a violin. The Governor has ordered a concert at which his favorite waltz should be played by one of the prisoners. Lisa produces a violin, but the officer says he will send the prisoner himself to collect it. The prisoner is Tadeusz. He and Martha have a brief scene of recognition before Lisa interrupts them. She allows them to continue their contact, hoping to capitalize on this “kindness” letter.

Scene v
Lisa confronts Tadeusz in the workshop where he produces silver ornaments to order for the SS officers. One is a Madonna which Lisa recognizes as Martha. Lisa offers Tadeusz the chance to meet Martha, but Tadeusz refuses. He does not want to be in Lisa’s debt.

Scene vi
In the female barracks it is Martha’s birthday. She sings a song about being in love with death. Lisa interrupts and tries to goad Martha by telling her that Tadeusz turned down a chance to see her, but Martha remains unmoved: if that is what Tadeusz decided, he was right to do so!
Yvette tries to teach an old Russian woman French, and Katja sings about Russia. Suddenly guards burst in: it is “selection” time. A list of numbers is broadcast, and one by one various prisoners are taken away. Lisa tells Martha that it is not her turn yet: she will arrange for her to witness Tadeusz’s concert.

Scene vii
Back on the boat Lisa and Walter have come to a new understanding. Even if the “Passenger” is Martha, they are determined to brazen it out, and decide to join the dancing in the Salon. Lisa is however horrified when the "Passenger” approaches the band, apparently to make a request, and they start to play the Governor’s

Scene viii
Back in the camp it is time for the concert, and all the officers and prisoners are assembled. Tadeusz, however, does not play the waltz, but something else. The scene breaks up in uproar as his violin is smashed and he is dragged off to the death cells.

Epilogue
We are left with Martha and her memories – and her longing that all who suffered should not be forgotten.