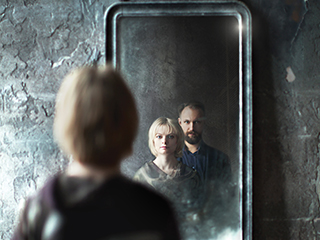 One of the most romantic operas of all times, based on Goethe’s famous novel, in a production that combines the world of visual art with the dire reality of unrequited love.

Act I
Summer. The garden of the bailiff’s house
The widowed bailiff is seated on the terrace with six of his young children around him. They are singing a Christmas carol, and he jovially rebukes their poor performance by saying they would not sing so badly if their elder sister Charlotte were there. The bailiff’s friends, Schmidt and Johann, look in and ask him to join them at a tavern later in the evening. Sophie, Charlotte’s 15 year old sister, comes in and they talk about Werther, a rather melancholy young man intended for a diplomatic career, and about Albert, who will make a good husband for Charlotte. Everyone goes into the house. Werther appears, and reflects on the summer evening atmosphere of the picturesque village. Charlotte, dressed for the ball to take place that evening, returns accompanied by the bailiff and the children. Fellow merry makers are late, and she takes advantage of the delay to prepare supper for the children. The bailiff hails the arrival of various guests and presents Werther to the 20 year old Charlotte, mentioning that she has looked after the young family since her mother’s death. Werther is touched by the scene of contented domesticity, and goes off with Charlotte to the ball. Night is falling and everyone has left except for Sophie. She is surprised by the unexpected arrival of Albert, Charlotte’s betrothed, who has been away for six months. They talk happily of the future when he will be Charlotte’s husband. Albert sings of Charlotte’s love for him.
Werther and Charlotte return from the ball in sentimental mood. She recalls the memory of her mother and speaks affectionately of her brothers and sisters. Werther praises her devotion and her beauty. He is moved to declare his love for her - whereupon the bailiff calls from the house that Albert has returned. The spell is broken. Werther, learning that Albert is the man chosen by Charlotte’s mother as her daughter’s future husband, is devestaded.

Act II
Autumn. Sunday afternoon, outside the church
Schmidt and Johann are sitting outside the local tavern watching the devout parishioners entering the church to celebrate the village pastor’s golden wedding anniversary. Charlotte and Albert, man and wife now for the past three months, appear arm in arm and talk of their contented life together. They, too, go into the church. Werther has watched them from afar and bitterly laments having lost Charlotte. Albert emerges from the church. He intuitively understands the cause of Werther’s distress and sympathizes with his feelings. Werther, impressed by this gesture, replies that he will be loyal to them both. Sophie, with her characteristic gaiety, joins in the conversation.
Werther remains alone. When Charlotte comes out of the church he cannot prevent himself from speaking again of his love for her, and, he nostalgically remembers their first meeting. Charlotte warns him that she belongs to another. He must, she adds, try to forget her. Go away, she tells him, and do not return until Christmas. Alone, once again, he gives way to despair. Sophie’s invitation to join in the celebration is brusquely rejected. He leaves her in tears saying that he will never return. When she passes on the news, Albert realizes it is obvious that Werther still loves Charlotte.

Act III
Winter. Christmas Eve, the drawing room of Albert’s house
Charlotte thinks of Werther and re reads his letters to her. She knows now that, despite herself, she loves him as much as ever. Sophie enters but even her innocent optimism is unable to cheer her sister’s somber mood. Charlotte gives way to her overpowering emotion, her heart is torn between love for Werther and her moral principles. Werther himself suddenly appears, pale and desolate. He has returned at the appointed time, but his period of absence has done nothing to quell his ardor. Together he and Charlotte evoke tender memories of the songs they sang and the books they used to read, especially the Romantic ballads of Ossian which inspire Werther to meditate on the futility of love. But Charlotte, making a supreme effort, forces herself to reject him and flies from the room. Werther is left without hope.
Albert returns and his suspicions are aroused by Charlotte’s obvious agitation. A servant hands him a letter from Werther asking to borrow Albert’s pistols as he is about to go on a long journey. The pistols are duly dispatched. The sinister meaning of the note dawns on Charlotte, and once Albert has gone she rushes off to find Werther.

Act IV
Christmas night, Werther’s lodging
Charlotte arrives in Werther’s study to find him mortally wounded. He asks her forgiveness, though she, driven by remorse, claims that she is the one who needs to be forgiven. He warns her not to call for help: he will be happy to die avowing his adoration for her. She confesses that she has loved him since the day they first met and she sees now that it is her fault that she has lost him. She returns his kiss. As the distant sound of children singing the Christmas carol through the window emerges, the distraught Charlotte realizes that t he man she loved is dead.