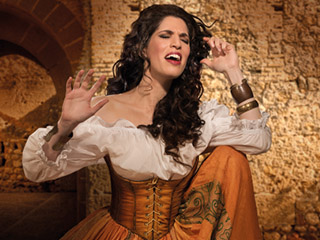 The Metropolitan Opera’s sizzling and larger than life production of one of the most popular operas in all time returns to the stage with hundreds of participants featuring Bizet’s sensuous score and the free spirited gypsy who believes in free love.

Act I
A square in Seville
Officer Morales and his soldiers are standing around, chatting, when Micaela, a shy young girl from Navarre, approaches them, looking for Don José. As the soldiers are frightening her away, a mounted guard, led by captain Zuniga and corporal José, arrive followed by a crowd. José hears of the young girl who was looking for him and recognizes Micaela who grew up at his house, just when the bell sounds, summoning the girls of the cigarette factory back to work. Among all the girls entering the square, Carmen appears, brazenly addresses the men and tries to attract the attention of Don José by throwing him a flower plucked from her corset. After hesitations, Don José picks up the flower. When Micaela returns, she brings Don José a letter from his mother back at their village, and some money his mother saved for him. Shouts are heard from the factory and the square fills with people; apparently Carmen has had an argument with one of the workers and stabbed her. Zuniga has her arrested by Don José and then tries to interrogate her, though he soon loses patience and orders her imprisonment. Carmen sings to Don José, seducing him and bewitching him to let her escape.

Act II
The tavern of Lilas Pastia
Carmen and her gypsy friends Frasquita and Mercedes are singing and dancing along with and Morales. Outside, the crowd sings the praises of Escamillo, the toreador, winner of the bullfight in Granada, and of the glories of bullfighting. Carmen mesmerizes Escamillo, who tries to talk to her, but she is only thinking about Don José. He has been jailed, after letting Carmen escape, and now is about to be released. As the toreador departs, the smugglers El Dancairo and El Remendado join Carmen and the others. They need them to divert the attention of the coast guards. The smugglers want to leave with the girls, but Carmen wants to wait for Don José. The smugglers suggest that Carmen will encourage Don José to join them. As Don José arrives, Carmen dances for him and persuades him to join the gypsies. When Zuniga appears, the two men fight and the smugglers rush back in to separate them. Eventually Don José agrees to join the smugglers.

Act III
Several months later in the Mountains
Don José is depressed as Carmen has left him for Escamillo, and he regrets having sacrificed everything for her. When he tells her that his mother lives in a nearby village, she mocks him that he ought to return to his mother, and he reacts by threatening to kill her. The smugglers go away, leaving Don José to guard the merchandise. Micaela appears, looking for Don José, exactly as Escamillo arrives to meet Carmen. He introduces himself to Don José, and tells him he came to find Carmen, with whom he is in love. Don José challenges Escamillo to a knife-fight, and the smugglers return and separate them. Escamillo invites the smugglers to his next bullfight. The smugglers are about to leave Remendado discovers Micaela hiding. She tells Don José that his mother has sent her to plead him to come home with her. Carmen tells him to leave but he swears he would not let her go off with her new lover. Micaela, however, in a last desperate effort to persuade him, tells José that his mother is dying and longs to see him. He decides to leave with Micaela, threatening Carmen that they will meet again.

Act IV
A Square in Seville
It is the day of the great bullfight in Seville, and the square outside the bull-ring is a scene of great bustle and activity. Escamillo appears, Carmen on his arm, and then leaves to prepare for the bullfight. A gypsy tells Carmen that Don José is hiding in the crowd, watching her, and that she should be careful. She is scornful of the warnings and remains in the square. When Don José arrives, he tells her he has not come to threaten her but to beg for her love, yet she rejects him cruelly.  José kills Carmen and gives himself up.