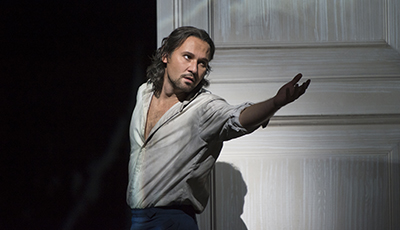 The greatest lover of all time chases women from land to land before he settles in Spain where he fails to add another conquest to the 1,003 women he already seduced there. One of the greatest operas ever written in a new captivating production.

Act I
Leporello is waiting for his master Giovanni, who is trying to seduce Donna Anna in a nearby house. Giovanni, wearing a mask, rushes out pursued by Donna Anna who is determined to discover her assailant’s identity. Her father, the Commendatore, appears and challenges Giovanni who kills the Commendatore and flees with his servant. Anna meanwhile returns with Don Ottavio and discovers her father’s dead body. She implores Ottavio to find the murderer and avenge her father’s death.
As Leporello reproaches his master for his way of life, another lady enters desperately seeking the man who has ruined her. Giovanni gallantly steps forward to console her, but recognizes her as Donna Elvira whom he had previously seduced and abandoned. He leaves Leporello to explain to Elvira that she is just one among Giovanni’s thousands of conquests.
A group of peasants is celebrating the wedding of Zerlina and Masetto. Giovanni and Leporello enter and the Don is immediately attracted by Zerlina. He sends the guests away to his nearby villa to be entertained lavishly. Alone, Giovanni promises to marry Zerlina and after an initial resistance, she agrees to follow him. Suddenly Elvira enters, denounces Giovanni as a seducer and leads Zerlina away. Anna and Ottavio enter and greet Giovanni. Elvira returns and warns them that he is the man who has violated so many women. As Giovanni and Elvira leave, Anna realizes with horror that Giovanni is the very person who made an attempt upon her honor and demands that Ottavio revenge the death of her father. Giovanni meets Leporello and instructs him to arrange the evening’s merriment.
In the garden of Giovanni’s villa Zerlina is trying to soothe Masetto’s jealous anger but succeeds only momentarily. Now Elvira, Anna and Ottavio, wearing masks, enter with the intention of challenging Giovanni. Leporello invites them to join the party. Inside the villa Giovanni continues his attempt to seduce Zerlina. When a scream is heard, everyone is about to go to the rescue of Zerlina when Giovanni enters dragging Leporello and denouncing him as Zerlina’s seducer. No one believes Giovanni yet he manages to slip away.
Act II
Leporello feels that life with Giovanni is too dangerous, but a few coins persuade him not to leave his master. Giovanni is now interested in Elvira’s maid and exchanges hats and cloaks with his servant, believing that in this garb his chances to allure the maid are better. In order to draw Elvira away, Leporello, disguised as Giovanni, pleads his love to her and leads her off. Giovanni now serenades the maid. Masetto and a group of peasants enter seeking Giovanni. The disguised Don promises to help them find him and sends them away in various directions. Masetto lingers a moment and Giovanni beats him, leaving him lying in the street where Zerlina finds him and offers her comforts.
Leporello is trying to free himself of Elvira, but suddenly Anna, Ottavio, Zerlina and Masetto enter, all taking him for Giovanni and are astonished to find Elvira pleading on his behalf. In mortal danger, Leporello throws off his disguise and slips away.
Giovanni and Leporello meet by moonlight in a cemetery. A voice from the Commendatore’s statue responds to the Don’s laughter and Giovanni orders his servant to invite the statue for dinner. The statue accepts.
Anna pleads with Ottavio not to insist on their immediate marriage and asks him to wait a little. In Giovanni’s house, Leporello is arranging a dinner party. Elvira bursts in with a final plea to Giovanni to change his way of life, but he will not listen. As she leaves she screams and the terrified Leporello sees the Commendatore’s statue arriving for the promised dinner. The stone guest demands Giovanni’s immediate repentance, and as the Don refuses the Commendatore drags him away. As Elvira returns with Anna, Ottavio, Zerlina and Masetto they are astonished to find that Don Giovanni has vanished.
All’s well that ends well: vengeance on Giovanni has been achieved, Anna and Ottavio will marry in a year’s time, Elvira will retire to a convent, Zerlina and Masetto will go home and Leporello will seek a better master.