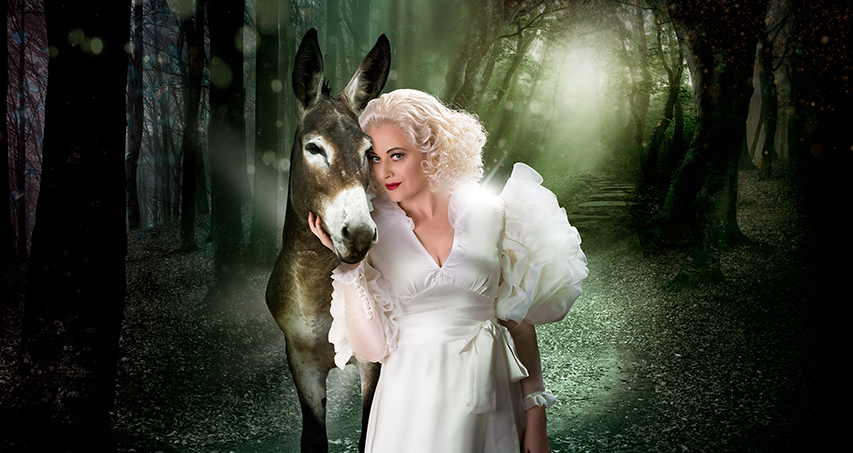 Ido Ricklin returns to the Israeli Opera to direct Britten’s haunting score of Shakespeare’s comedy. Four lovers are lost in a night of agony and ecstasy at the center of which the queen of the fairies falls in love with an.. .ass.

Libretto: Benjamin Britten Piter Pears, after the play of Shakespeare

Act I
The woods by Athens. Evening
The fairies assemble. Puck, a devilish sprite, announces the arrival of the fairies King and Queen, Oberon and Tytania. The royal couple enters, quarrelling. Oberon demands to have an Indian boy, of the Queen's entourage. Tytania, who dotes on the changeling boy, refuses, although their rift might lead to a catastrophe. Tytania leaves and Oberon swears a revenge. Oberon sends Puck to bring him a magical flower. When this flower's nectar is dripped upon the eye of a sleeping person, that person will fall in love with the first creature he (or she) see when they wake up. Thus will Oberon make Tytania fall in love with some repulsive creature and humiliate her.
Hermia and Lysander, two Athenian lovers, meet in the woods. Hermia's father wants to force her into marriage with another man, Demetrius. The lovers decide to flee from the city, and get married. Helena, Hermia's friend, betrays the secret plan to Demetrius. the bridegroom-to-be. Demetrius arrives at the woods, chasing the runaways. Helena, who is in love with Demetrius, follows him. Demetrius shuns her away. Puck returns with the magical flower. Oberon sends him on another errand - to find Demetrius, and charm him with the love nectar, so that he falls in love with Helena.
A group of "rustics" meet in the woods, preparing an amateur theatre show. The director, Peter Quince, announces the casting. Francis Flute gets to play the leading lady part, to his great dismay. Nick Bottom is cast as the Lover, but covets all the other parts in the play as well. After some efforts and quarrels, the casting is done, and a first rehearsal in set for later that night.
The runaway couple, Lysander and Hermia, are lost in the woods. They fall asleep side by side. Puck mistakes Lysander to be the man he was sent to charm. He drips the love nectar into Lysander's eye. Helena arrives accidentally. Lysander wakes up, and when seeing Helena, he instantly falls in love with her. She runs away and he follows. Hermia wakes up from a nightmare, and finds herself deserted. In another spot in the woods, the fairies sing a lullaby to Tytania. When they leave her, Oberon sneaks on the sleeping Queen and drips the love-nectar into her eyes.
Act II
The woods, night
The six rustics come to rehearse their play - a tragic tale of two lovers. They struggle with theatrical problems. How will they place, on stage, the wall that separates the two lovers? How will they light them with moonshine? Will the ladies in the audience not fear the character of the Lion? Puck bewitches Nick Bottom, placing a donkey's head on his neck. The company members flee, aghast. Tytania, who was sleeping nearby, wakes up. As she sees the man with the donkey's head, she is filled with passionate love. She summons her fairies, and orders them to attend on her lover. Lustfully, she carries Bottom into her bed, and they sleep together.
The abandoned Hermia finds Demetrius. She accuses him of murdering Lysander. Demetrius falls asleep, forlorn. Having realized Puck's mistake, Oberon tries to correct it, and drips the love nectar into Demetrius' eyes. Lysander and Helena arrive. Helena thinks that the lovesick Lysander is only mocking her. As Demetrius wakes up he also falls for Helena. Hermia arrives, finding new and astonishing circumstances - so far, both men were in love with her. Now they both despise her, competing for Helena's heart. The men fight, the women bicker, until all four of them fall asleep, exhausted. Puck, promising a happy end, drips the last drops of the love nectar into Lysander's eyes.
Act III
Scene i
The woods, before dawn
Tytania sleeps in Bottom's arms. Oberon removes the spell and wakes her up. She is horrified by the strange creature she has slept with, and re-unites with Oberon. Puck removes the donkey head from Bottom's neck. The fairy court disappears with the break of dawn.
The lovers wake up. Lysander sees Hermia again, and falls in love with her again. The two pairs are happy to find each other, and the night events seem to them as a distant dream. They decide to return to Athens and beg the Duke to let them marry each other, according to their own wishes.
Nick Bottom wakes up, astonished by the dream he had. His fellow rustics return to the woods, lamenting for their lost friend, and for the play they intended to perform at the Duke's wedding day. They are delighted to find Bottom there, and hasten to town, to prepare for the show.
Scene ii
The Duke's palace, evening
Duke Theseus prepares for his wedding with Hyppolita, Queen of the Amazons. The lovers arrive, begging for his pardon and blessing. He invites them to watch a play with him and his bride.
The company of rustics, directed by the nervous Peter Quince, perform "The Tragedy of Pyramus and Thisbe".  The tragedy turns into an outrageous comedy, with scene-stealing performances of the "wall", "moonshine" and a very timid "Lion". A hilarious death scene of the star-crossed lovers concludes the play. The members of the audience join the actors in a merry dance. Oberon, Tytania, Puck and the fairies arrive at bedtime to bless all the couples with everlasting love, and happy years of marriage.