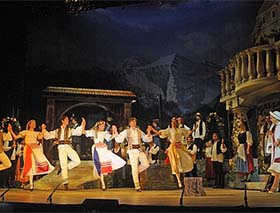 Countess Mariza is one of the most beloved operettas in the repertoire. A tale of mistaken identities, love and despair, white lies and a lot of bubbling Hungarian melodies. The operetta wizards from Budapest return to Israel with a production full of pure operetta delights.

Act One
A young nobleman, Count Tasziló Endrődy-Wittenberg is left penniless after he and his late father have squandered the family fortune. In order to make a living and provide for Lisa, his beloved little sister, he goes incognito and finds employment as a humble bailiff at the Decsényi estate.
The story itself begins when Tasziló receives a visitor: his old friend, István Liebenberg. He is followed by the lady of the Decsényi estate, the Countess Maritza. The inhabitants of her estate greet her with joy, as does Prince Dragomir Populescu, Maritza’s aging neighbour who is completely infatuated with her. Maritza is accompanied by a friend she made during her travels, Lisa, Tasziló’s sister.
Maritza tells her confidantes that she has returned home because she is disappointed in love and tired of the fortune hunters who court her continually. In order to discourage future suitors, she puts an ad in the local newspaper announcing her engagement to the non-existent Baron Zsupán Kolomán.
When Maritza first encounters her bailiff, she is dismissive and impolite towards him. Tasziló comes up with a prank to avenge himself: he convinces István to impersonate the non-existent Baron. Soon, Zsupán Kolomán indeed appears, a caricature of old-school fiery Hungarian nobility, and demands that his fiancé, Maritza make good on her promise.
Maritza holds a party to celebrate her "engagement", and sends a single glass of champagne to her bailiff. Tasziló, who is used to being a noble guest in such occasions, is left outside. The Countess happens to hear him, and orders him to keep singing, yet he proudly refuses. Maritza promptly fires him.
Manja, the local Romani fortune-teller, predicts that in a month Maritza will find true love. Dragomir and all the guests leave to continue the evening’s festivities at the Cabaret Tabarin. Maritza decides not to fire Tasziló after all, and the two resolve to be friends.

Act Two
Almost a month has passed, and Maritza lives in relative seclusion, hoping to resist Manja’s prophecy: if she meets no new men in that month, she can avoid falling in love. Dragomir hopes that the prophecy was about him, and holds yet another party for Maritza. In the meantime, Lisa has fallen for Zsupán/István, and he reciprocates her feelings.
Maritza and Tasziló discuss the administration of the estate, and slowly develop feelings for one another. However, Tasziló is concerned that if he reveals his real identity, she will reject him for being a liar, or worse, suspect him of being yet another fortune hunter. István reveals his true identity to Lisa who of course forgives him.
Tasziló decides to leave, writing a letter to Lisa, however, Dragomir intercepts the letter, and shows it to Maritza. They both misunderstand, and assume that Tasziló is a selfish fortune hunter, who is actually Lisa’s lover. She publicly rejects and humiliates him, until Lisa appears and reveals that she is Tasziló’s sister, clearing up the misunderstanding.
Since her bailiff is leaving anyway, Maritza convinces István and Dragomir to help her with the work on the estate. Tasziló says his goodbyes, asks for a reference, and he and Maritza part coldly.
A brand new visitor arrives: Lady Bozena, Tasziló’s eccentric aunt, and she promises to return his wealth and his estates to him if he settles down and gets married. Bozena reunites with Dragomir, her former lover, and she recruits his help in stopping Tasziló from leaving. Tasziló returns and Maritza writes him the reference he asked for – a love letter. The lovers are reunited, and the prophecy has come true – the story ends with a double engagement - Maritza and Tasziló and István and Lisa.