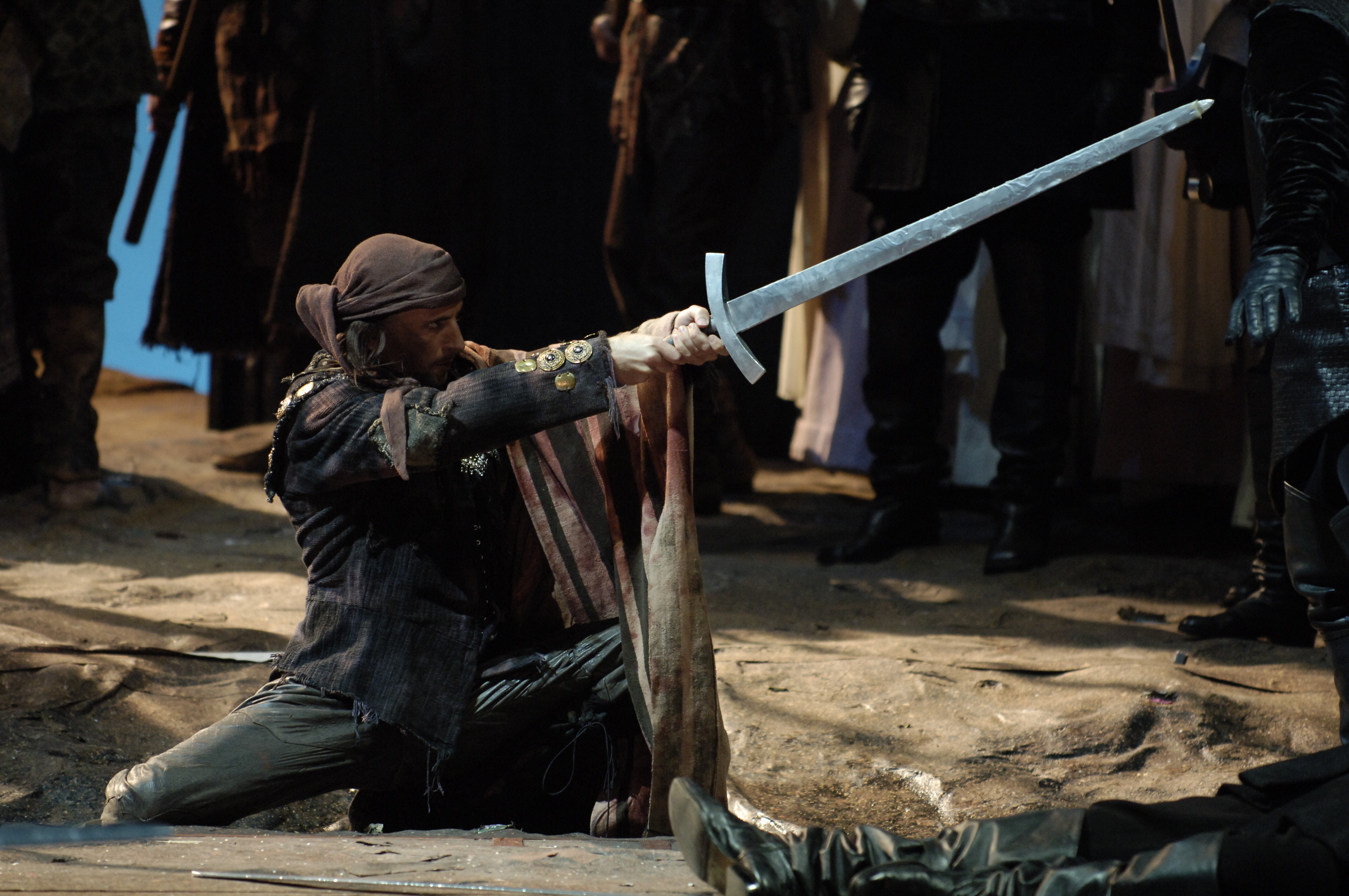 The wheels of destiny turn fast in this tale of murder, revenge and destruction. One of Verdi’s most popular operas moves quickly from unconditional true love and genuine friendship to fiery spite and bottomless hate.

The events take place in Spain and Italy around the middle of the 18th century.

Act I
The Marquis of Calatrava's house in Seville
The Marquis of Calatrava bids his daughter, Leonora, goodnight, concerned by her sadness and retires. She is in love with Don Alvaro, a Peruvian of noble Inca blood, with whom she intends to elope. The Marquis despises Alvaro as a half-breed and has forbidden her to marry him. As the Marquis leaves, Curra, Leonora's maid, begins preparations for Leonora's elopement. While wishing to be united with Alvaro, Leonora also loves her father and knows that he too cares for her. Her indecision is intense, but Curra outlines the bloody consequences for Alvaro if he is now deserted.
The sound of approaching horses heralds Alvaro, who climbs in through a window. Alvaro is eager to leave, but Leonora shows signs of reluctance and begs that the elopement be postponed another day. Alvaro grows suspicious and accuses Leonora of not loving him. She passionately affirms her feelings, and the lovers prepare to depart. The sound of approaching footsteps is heard and Alvaro draws his pistol. The Marquis enters. He insults Alvaro, goading him to a duel. Alvaro refuses, the Marquis grabs him, but the weapon accidentally fires, fatally wounding the old man. With his dying breath the Marquis curses his daughter, who makes her escape with Alvaro. As Don Carlo, his son, runs in, the Marquis dies in his hands.

Act II
Scene I
The inn at Hornachuelos, 18 months later
A crowd of muleteers, deserting soldiers, their women and others are merrymaking at an inn at Hornachuelos. Supper is announced and a "student" (Don Carlo di Vargas, Leonora's brother, in disguise) says grace. Leonora and Alvaro were separated on the night of their elopement. Each considers the other dead, but Carlo knows they are both alive. Determined to avenge his father's death and his family's honor, he is now searching for his sister and her lover. As the dance music continues, Leonora enters dressed as a young man. She is under the protection of Trabuco, a peddler. Upon entering she recognizes her brother and immediately retreats.
Preziosilla, a young gypsy, encourages the young men to join battle against the Germans and consents to read their fortunes. She predicts a miserable future for Carlo, whose pretence she suspects. A chorus of pilgrims is heard while Leonora prays for divine mercy. As the pilgrims depart, Carlo tries to question Trabuco about the identity of his traveling companion. He is finally thwarted and called to give an account of himself to the assembled company. He presents himself as Pereda, a student helping a friend track down the friend's sister and her lover, who, he says, has returned to his native America. Overhearing Carlo, Leonora realizes that Alvaro is still alive and feels betrayed and abandoned by him. The others, however, are happy enough and joyfully retire for the night.

Scene ii
Outside the monastery of the Madonna of Angels
Leonora, seeking sanctuary and solitary atonement, struggles towards the door of a monastery. She rings the monastery bell, which is answered by Melitone, a Franciscan friar. He reluctantly agrees to fetch the Father Superior (Padre Guardiano), who arrives and dismisses Melitone. Alone with the Father, Leonora reveals her identity and the succession of accidents which have led her to him. She rejects his suggestion that she enter a convent and insists on living the life of a hermit. He agrees to direct her to a secret cave in the mountains, where he alone will bring her food and where she will find a bell which she is to ring only in times of great danger. All friars assemble, and the Father Superior tells the monks that a hermit is to live in the holy cave and that no one must invade his seclusion. All join in a curse on any violator, before singing a hymn to the Madonna of Angels.

Act III
Scene i
A battlefield in Northern Italy, five years later
Don Alvaro has enlisted in the Spanish forces under the assumed title of Captain Don Herreros, and is already considered a hero. Believing Leonora to be dead, he sings of his ill fortune and asks her to look down on him from heaven. Cries for rescue disrupt him and he departs to investigate. He returns with Carlo (this time, disguised himself as an adjutant to the Spanish general, recently come to the fray), having saved him from assassins. The two exchange false names and then swear eternal allegiance. Further cries alert them to a renewed enemy attack, and they rush off together.

Scene ii
The battle resumes and a surgeon describes its progress. Victory is announced, but Alvaro/Herreros is severely wounded. Carlo saves him from death, promising him the Order of Calatrava; Alvaro reacts violently to the name. He entrusts his new friend with the key to a case wherein lies a packet of letters to be burnt if Alvaro dies, so that his anonymity and honor might be preserved. Left alone, Carlo recalls Alvaro's reaction upon hearing the name of Calatrava, and begins to suspect that he may be his sister's lover. He is tempted to open the letters, but his honorable scruples prevent him. However, he discovers in Alvaro's case a locket containing a portrait of Leonora. Just then the surgeon announces that Alvaro will live. Carlo is overjoyed, knowing he will now be able to wreak his vengeance.

Scene iii
A military encampment
The camp fills with soldiers, gypsies and hawkers. Preziosilla plies her trade as a fortune-teller and Trabuco is peddling his wares. A group of beggars dispossessed by the war and begging for alms is followed by a group of miserable conscripts, but Preziosilla and her gang soon brighten the atmosphere. Melitone appears and upbraids them all for such disorderly behavior. The soldiers eventually tire of Melitone and his sermon and chase the friar away, while Preziosilla rouses everyone with a song of victory.
A patrol makes a tour of inspection. Alvaro has recovered from his wound, and Carlo comes to his tent, calls Alvaro by his true name and then reveals his own true identity. In vain Alvaro tries to persuade him that he is guiltless of the Marquis' death and that Leonora is innocent. Carlo tells Alvaro that Leonora is still alive and challenges him. Alvaro, overjoyed by the news, refuses Carlo's challenge, but when Carlo insists on wrecking vengeance on both Alvaro and Leonora he takes it up. The two swear mutual defiance and begin to fight. They are separated by a passing patrol: Carlo is dragged away; Alvaro resolves to take holy vows and to end his life in a cloister.

Act IV
Scene i
The monastery of the Madonna of Angels, five years later
Melitone is issuing soup to the needy. The Father Superior advises kindness to the suffering poor, but Melitone's patience runs out and he drives them away. Carlo has tracked down Alvaro - who, under the name of Father Raffaele, has become a monk in the very monastery that has given Leonora refuge - and arrives at the monastery demanding to see him. Alvaro is summoned and Carlo calls for a duel. Alvaro offers peace, but when Carlo taunts him as a half-breed Alvaro takes up the challenge and the two rush from the monastery for the duel

Scene ii
A valley by Leonora's cave
Leonora, longing for the peaceful release of death, restates her love for Alvaro and begs God for peace. The duel between the two men spills over onto the neighboring crags in the vicinity of Leonora's isolation. Upon hearing the clashing of swords she takes refuge in her cave. Carlos is mortally wounded by Alvaro, who invades the hermit's sanctuary to request the last offices for the dying man. Leonora and Alvaro recognize each other. Alvaro tells her of what has happened, and she rushes to embrace her dying brother. As he expires, Carlo stabs her. The Father Superior, who has come in answer to Leonora's alarm bell, orders Alvaro to stop cursing fate and to humble himself before God. The dying Leonora joins him in this plea.