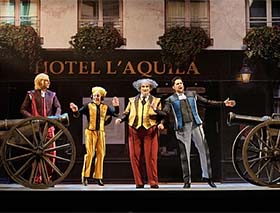 For the first time in Israel - a delightful Rossini comedy in a colorful production presented by the Royal Opera of Wallonie from Liege. Sweeping Rossini melodies with a multitude of characters searching for true love in a Parisian hotel where all is acceptable in this game of love.

Chorus and orchestra of the Opera Royal de Wallonie, Liege

New production - Sung in Italian
English and Hebrew Surtitles
Duration: Two hours and a half

The action takes place in the Aquila in Paris, a small hotel frequented by numerous groups of tourists.

Upon returning from a long trip around the world, Alberto is complaining that he has not been able to find a girl he likes anywhere. He meets Madama La Rose, the manageress of the hotel, and Mr. Traversen, an English eccentric and they are all chatting while waiting for the day’s news (La Gazzette.com).

Pomponio, a Neapolitan merchant, arrives at the hotel with his daughter Lisetta and his secretary Tommasino. He has placed an advertisement in La Gazzette extolling his daughter whom he wants to marry off preferably to a very rich suitor, and is expecting to receive hundreds of applicants. The hotel manager, Filippo, himself in love with Lisetta, is bewildered at her father’s mad behavior. At this very moment, two new customers enter the hotel: Anselmo and Doralice, his exuberant daughter. Lisetta returns with of lot of shopping bags. Alone with Filippo, she complains about her father, when Alberto arrives, making at once the connection with the young woman presented in La Gazzette. He tries to seduce her but Filippo stops him by claiming that Lisetta is his wife. However, when Doralice arrives, Alberto is once again certain that actually she is the young woman mentioned in La Gazzette. Since she is even more to his taste, all seems for the best. Alberto asks Pomponio for the hand of the woman he thinks is his daughter.

The two girls, accompanied by Filippo, return and Pomponio tells his daughter that he has just found her a husband. However, he gets Alberto’s surname wrong, calling him Filippo, to the great delight of the two people who think they have won the game. Pomponio calls Alberto who enters but cannot see the young woman he loves and is clearly astonished. Confusion reigns, especially since Lisetta and Filippo continue to proclaim their mutual love, which irritates Pomponio. Now he decides to put in another advertisement and invite the women of France to  marry him. Filippo now decides to play some dirty tricks on him. He starts by claiming to be married to Madama La Rose and that he is waiting for an important person, a Quaker, who is coming to the hotel to marry Lisetta. Lisetta is informed by her father that Filippo is already married and so believes that she has been betrayed. At this moment, the grand Quaker arrives with his entourage, but it is actually Filippo in disguise. He immediately launches into a display of gallantry and, above all, confuses the clueless Pomponio even more yet Lisetta shows her disagreement. Pomponio tries in vain to convince his daughter. Her refusal provokes the simulated rage of the grand Quaker who makes a scene in the hall of the hotel and shouts loudly that he has been deceived and that he will destroy Pomponio.

Alberto talks things over with Traversen who claims that he has won the heart of Doralice and is waiting for the notary to formalize their union. At that moment, Filippo returns as himself and apologizes that he was not able to explain himself to Lisetta who after an initial anger admits that she will love him forever. Alberto is stunned by Traversen’s announcement. He would like to drive Doralice from his heart, but an inner voice tells him that the situation could well turn around. Filippo confirms Doralice’s love to Alberto and they join forces to challenge Pomponio to a duel because he had promised Lisetta to him and then refused to let him have her. Pomponio is anything but reassured at the idea of having to fight a duel with these two angry young men and his cowardice amuses the two partners in crime who do all they can to terrify him. At the end, Pomponio agrees to everything, very happy that he has managed to stay alive.

Filippo devises a new plan so that Alberto and he can run away with Doralice and Lisetta. To achieve this, they must all disguise themselves as Turks. Pomponio arrives and tells his daughter that she must leave the hotel with him. As they need to play for time, Madama La Rose suggests to Lisetta that she should pretend to faint. When she pretends to come round, she describes how in her dream she was welcomed by the heroes of the past who all denounced the narrow-minded attitude of her father: either he must make concessions or he will not see her again. Filippo announces the arrival of important guests from Turkey who arrive to hail the great Pomponio, who must first put on Turkish dress like theirs. Once they are all disguised as Turks and Pomponio can no longer find his daughter, Madama La Rose explains the true picture to these two blind fathers, telling them that their two daughters must be married to the men they truly love. Under duress, Pomponio and Anselmo make the best of a bad situation, forgive their daughters and accept their new sons-in-law. All’s well that ends well.