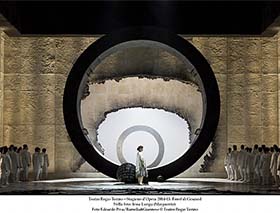 The ageing scholar Faust signs a pact with the devil and regains his youth. But such deals can never end happily and the price Faust has to pay cannot be measured in gold as we reveal in this grand French opera which is based on Goethe’s novel.

Act One
Faust has spent a lifetime in the study of philosophy. Disillusioned, he resolves to poison himself. He curses God and calls for the devil. Mephistopheles obligingly appears. He offers Faust riches, power, or glory but Faust wants only youth and women. Mephistopheles agrees: on earth Faust will be master, but in the world below roles will be reserved. When Faust hesitates, Mephistopheles conjures up a vision of Marguerite. Faust signs the contract and is transformed.

Act Two
A fair is in town and the citizens are on holiday. Valentin is concerned about leaving Marguerite, his sister, unprotected. Wagner starts a song to cheer them up but is interrupted by Mephistopheles, who sings a wilder one. Mephistopheles tells fortunes: Wagner, it seems, will be killed in his first battle, any flowers that Siebel picks will wither, and Valentin will meet his death at the hands of someone close to him. Disgusted by the wine on offer, Mephistopheles conjures up a better vintage to toast Marguerite. The soldiers cross themselves, convinced that they are in the presence of the devil. Mephistopheles leads Faust to a place where couples are waltzing. Faust sees Marguerite. He offers her his arm. She refuses, but so charmingly that he is left more entranced than before.

Act Three
Siebel is gathering flowers for Marguerite and, as prophesied, they wither.
Mephistopheles and Faust have been watching. The atmosphere of innocence surrounding Marguerite’s home moves Faust. He is conscious of his will to ruin her. Marguerite, unable to sleep and obsessed with the young man, sees the jewels left for her by Mephistopheles. When she tries them on, she sees a different woman in the mirror and she is further confused by the encouragement of her neighbour, Marthe. Faust and Mephistopheles epear. Mephistopheles flirts with Marthe, leaving the garden clear for Faust to seduce Marguerite. She begins to weaken. After the first kiss, she panics and rushes into the house. Mephistopheles summons up all the intoxicating odours from the night flowers. The incense has it effect on Marguerite, who confesses to the night that she loves Faust. Taking his cue, Faust calls out her name. Mephistopheles now has a grip on both their souls. They make love.

Act Four
Seduced and abandoned, Marguerite is carrying Faust’s child. Siebel promises to care for her. Marguerite, still in love with Faust, prays for him and their unborn child. The soldiers return with Valentin. Siebel tries to stop him entering the house. Suspecting the worst, Valentin pushes him aside and goes to see for himself. It is now dark and Mephistopheles serenades Marguerite on behalf of Faust. Valentin races out of the house and demands satisfaction from his sister’s seducer. He and Faust fight and, with a little help from Mephistopheles, Valentin is fatally wounded. Marguerite watches her brother die and hears him curse her with his dying breath. Distraught, she goes to church to pray for forgiveness. As she hears the voice of Mephistopheles telling her that she is damned, Marguerite collapses in terror.

Act Five
Her child dead and her reason lost, Marguerite has been locked away. Assisted unwillingly by Mephistopheles, Faust has broken in to save her. She seems to recognise him. Faust is overwhelmed with pity. Marguerite panics at the sight of the devil, sees the blood on Faust’s hands and, with a frantic appeal to Heaven, she dies. Mephistopheles damns her but angelic voices proclaim that she is saved.