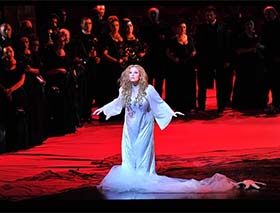 Lucia loves Edgardo but her brother forces her to wed Arturo. Lucia obeys yet transforms her wedding night into a feast of murder and a mad scene full with mesmerizing coloraturas.

The action takes place in the Lowlands of Scotland in the 16th century.
The ruthless and manipulative Enrico (Henry) Ashton has obtained the estates of Ravenswood, ancestral home of Edgardo (Edgar), who now lives in poverty in the crumbling cliff-side castle of Wolf’s Crag. The death of William and the accession of Mary to the throne of Scotland has brought a new party into power and placed Ashton’s gains in jeopardy. He urgently needs to forge an alliance with the new ruling party and his only means of achieving this is through the marriage of his sister, Lucia (Lucy). The recent death of their mother has placed her effectively in his power, but she is a stubborn and independent girl, and he cannot necessarily rely on her compliance in his schemes.

Part One: The Departure
Ashton's accomplice, Normano, (Norman) sets his followers to spy on Lucia’s actions. Ashton explains to him his political and financial dilemma, and hence his dependence on Lucia. The pastor, Raimondo (Bide the Bent), urges Ashton to be patient with her: she still grieves for the recent death of their mother. Normano reveals that he has doubts about Lucia's trustworthiness. He relates a recent incident in the park when Lucia was attacked by a wild bull. At the last moment the bull was killed and Lucia rescued, but no one knows who her rescuer was. Normano suspects that she has secretly been meeting Edgardo, and that they are in love. Normano’s followers return and once again recount that they have seen a mysterious stranger in the grounds; this seems to confirm Normano’s suspicions. Ashton breaks into a furious rage, revealing that his entire enterprise stands on the brink of ruin unless he can manipulate Lucia into a diplomatic marriage.
In the castle's garden, Lucia is waiting by an old fountain with her companion Alisa (Alice) for a secret meeting with Edgardo. Alisa warns her of the danger of these meetings. Lucia recalls the legend of the fountain: a girl was murdered here by an insanely jealous member of the Ravenswood family. Her ghost still haunts the fountain, and Lucia believes she has seen her in the water. Edgardo arrives with the devastating news that he has decided to emigrate to France to fight for the cause of Scotland in exile. Before he leaves he intends to ask Ashton for peace between them and for Lucia’s hand. Lucia warns him that Ashton will never agree, and Edgardo reveals his deep bitterness against the man who killed his father and maneuvered him out of his property. He and Lucia exchange rings as tokens of their fidelity, and he leaves for France.

Part Two: The Marriage Contract
Some months later, Ashton has decided to press ahead with Lucia’s diplomatic marriage with Arturo (Sir Arthur Bucklaw). To weaken her resistance, Normano has intercepted the correspondence between Lucia and Edgardo, and now produces a forged letter that will convince Lucia that Edgardo has another bride in France. Ashton shows her the forged letter, and she is devastated, but still not reconciled to the marriage, even when Ashton begs her to understand that their family fortunes depend on her agreement. The guests and bridegroom are announced. The pastor continues to press Lucia to submit, insidiously revealing that although he himself ensured that at least one of her letters reached Edgardo, he has still not replied for many months. Arturo arrives amidst contrived rejoicing, and Lucia is forced to sign the marriage contract. At the moment of signature Edgardo returns and, discovering that Lucia has apparently betrayed her promise to him, curses her.

Scene ii
Alone in the crumbling poverty of his castle, Edgardo bemoans the fate of his family at the hands of Ashton. Ashton himself comes to the castle, and the two men decide to fight a duel the next day. At Ravenswood, the wedding celebrations are interrupted by Raimondo, who reveals that Lucia is insane, and has murdered her husband Arturo. Edgardo goes to pray at the tombs of his ancestors before his duel with Ashton, but when he meets Lucia’s funeral procession, he commits suicide.