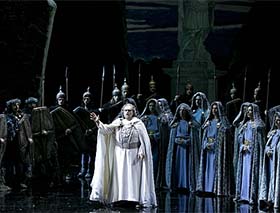 The Druid high priestess gives birth secretly to two children and when the secret is revealed, her crime has to be punished by death. Bellini’s beautiful bel canto opera examines the power of love and self sacrifice with haunting melodies.

Gaul has been conquered by the Romans. Oroveso, the Arch-Druid longs to lead a Gallic rebellion against the colonial forces. He and all the others wait for the signal to be given by his daughter, the Druid High Priestess Norma. But Norma has fallen in love with the Roman Proconsul, Pollione, and given birth to two children. They have been brought up in secrecy by her confidante Clotilde. Norma still loves Pollione but he has fallen in love with a novice priestess, Adalgisa.

Act I
Scene i
Oroveso sends the Druids to watch for the new moon. When it appears Norma will come to cut the sacred mistletoe. The Gauls pray that their god Irminsul will inspire her to call them to war. Pollione tells his centurion friend Flavio that he no longer loves Norma, his mistress and the mother of his children. Instead he now loves Adalgisa. In a dream he imagined that he was about to marry Adalgisa in Rome, when a shadow fell between them. He heard Adalgisa groaning and his children weeping as Norma took her revenge. At that moment the sacred gong is heard: Norma comes from the temple to perform her rites. She warns against the seditious voices that urge them to war telling the Druids that the time has not yet come. She salutes the chaste goddess of the moon and calls on her to spread peace on the earth as she does in heaven. Oroveso and the others look forward to their day of revenge, when the proconsul Pollione will be the first to fall. Norma privately longs for him to return to her in the first flush of his love. Adalgisa, torn between her religious duties and her love, is praying in vain that she will be able to forget Pollione. He appears and forces her to agree to leave with him for Rome the next day.

Scene ii
Norma has heard that Pollione must return to Rome. Now she feels more torn than ever at the sight of her children. Adalgisa comes to confess to the priestess Norma. She describes how her lover came to occupy the place in her heart that had been reserved for her god. Norma listens and recognizes her own emotions. She comforts Adalgisa and tells her that she can be released from her vow of chastity and that she is allowed to live in happiness with her love. Adalgisa reveals that the man is Pollione, who enters at that very moment. Norma turns on him in vindictive fury. Gradually, the truth dawns on Adalgisa: she refuses to leave with the faithless Pollione. The sacred gong sounds again, summoning Norma to the rites.

Act II
Scene I
Norma tries to find the courage to kill her children, as she watches them sleeping, determined to save them from the fury of her fellow Gauls, but also from shame in Rome. She sends Clotilde for Adalgisa and tells her rival that she herself will die and entrusts her children to her care. Adalgisa is moved and swears to speak to Pollione on Norma’s behalf. Norma’s hopes are reborn; the two women comfort one another.

Scene ii
The Gauls are impatient with their god’s curb on rebellion. They assemble for battle, having heard that Pollione is leaving. Oroveso tells them that he will be replaced by an even crueler Roman overlord. Because Norma has not yet summoned them to war, they swear to dissemble their real intentions and disperse peacefully.

Scene iii
Norma is now confident that Pollione will listen to Adalgisa and return to her side. But Clotilde comes to tell her to be brave: Adalgisa could not convince him; now he is threatening to abduct her by force. Norma swears revenge and summons all the Gauls to war. A Roman has been caught trespassing in the holy precinct. Pollione is brought in. Norma prepares to complete the rite of war, using him as the sacrificial victim but finds she cannot kill him. She interrogates him in private. When she asks him to leave Adalgisa he refuses. She threatens to kill their children and to kill Adalgisa. Norma recalls the Druids and reveals that a faithless priestess has betrayed her sacred vows and her country. She orders the pyre to be prepared. But instead of naming Adalgisa Norma confesses to her own crimes. Pollione asks to be forgiven. Oroveso begs her to recant her confession. Norma remembers that she will leave her children to the fury of the Gauls and persuades her father to protect them before she mounts the funeral pyre with Pollione, at a last minute decision, joining her.