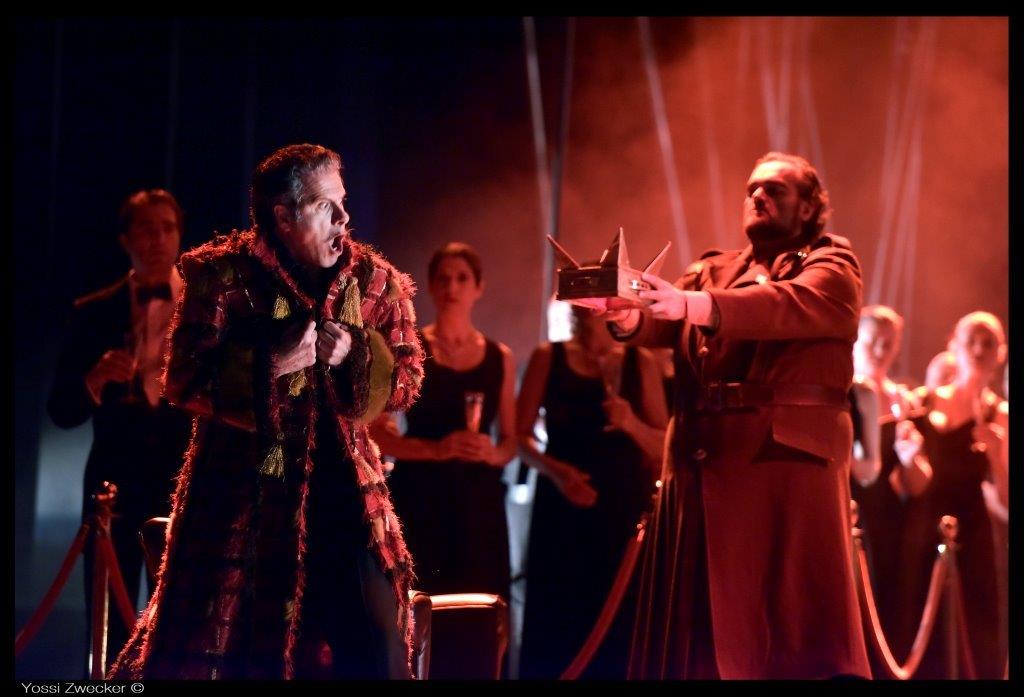 The Scottish tyrant and his crown thirsty wife rule with daggers and assassins in order to preserve the throne. Mysterious witches play with destinies in Verdi’s first Shakespearean opera.

From the repertoire | Sung in Italian | Duration: 2 hours and 45 minutes

Act I
After a victorious campaign against rebel forces, Macbeth and Banquo, generals in the army of King Duncan of Scotland, meet a group of witches, who hail Macbeth as Thane of Cawdor and future king, Banquo as father of kings thereafter. Messengers from Duncan approach, proclaiming Macbeth the new Thane of Cawdor, thus fulfilling the prophecy. Amazed at this turn of events, Macbeth muses on his chances of becoming king.
Lady Macbeth reads a letter from her husband describing his meeting with the witches. Exulting in the pros¬pect of power, she vows to add her own cunning and boldness to Macbeth's ambition. When a servant brings word that the king will spend the night in the castle, she invokes powers of darkness to achieve her aims. Macbeth enters, and his wife persuades him to murder Duncan that night. Duncan arrives, retiring at once. Macbeth, dreading his task, imagines a dagger before his eyes. As a night bell sounds he steals into the royal chamber. Lady Macbeth meets her husband as he staggers from the room, telling her the deed is done. She coolly takes the dagger from his trembling hands and goes to smear blood on the royal guards, who have been drugged.
Macduff and Banquo enter, discover the murder and summon the entire court.

Act II
Malcolm has fled to England for safety. Macbeth and his wife plot the murder of Banquo and his son, to prevent him gaining the crown as the witches prophesied. A group of assassins awaits Banquo and kill him, but his son Fleance escapes. At a state banquet, Lady Macbeth toasts her guests in a drinking song. Macbeth, secretly informed of the murder of Banquo, complains to the assembly of his absence. Suddenly, to the guests' astonishment, he imagines that he sees the general's ghost in front of him.
Lady Macbeth chides her husband, and he momentarily regains his calm, but Banquo’s phantom continues to haunt him, and the guests com¬ment on his behavior. Macbeth decides to go and question the witches.

Act III
Macbeth visits the witches to learn his fate and is confronted with several apparitions. The first tells him to beware of Macduff; the second, a bloody child, assures him no man “of woman born” can harm him; finally a crowned child reveals that Macbeth will rule invincible till Birnam Woods march against him. Comforted, he asks the witches if Banquo's sons will ever reign in Scotland; in reply they invoke the spirits of eight kings, who pass before the terrified Macbeth. Last of the line is Banquo, holding a mirror that re¬flects the other kings. Macbeth loses consciousness and the witches disappear. Lady Macbeth finds him, and the couple vows to kill all enemies.

Act IV
Near Birnam Woods Scottish refugees bewails their oppressed home¬land, caught in the grip of Macbeth's tyranny and mourn their families. Macduff, grieving over his murdered wife and children, is joined by Duncan's son Malcolm; they order their soldiers to cut branches from the trees as camouflage for an attack against  Macbeth's forces.
A Doctor and a Lady-in-Waiting observe the guilt-wracked Lady Mac¬beth as she wanders in her sleep, wiping imaginary blood from her hands. In her delirium she confesses her crimes and those of her husband.
Macbeth clings to the hope he can withstand the forces of Malcolm and Macduff, but curses his fate. Word of his wife's death reaches him. Messengers bring the astounding news that Birnam Woods is advancing. Macbeth leads some of his men to battle. Macduff seeks out Macbeth and exclaiming that he is not “a woman born” of woman but torn pre¬maturely from his mother's womb, kills the tyrant. A chorus of exultation salutes the death of the usurper and the ascent of the throne by Malcolm, the new king.