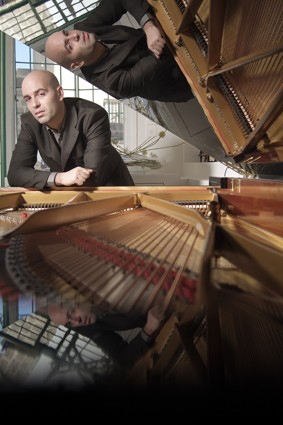 He has received grants from the American-Israel Cultural Foundation (1990-1998), the Bracha Foundation (2001), the Rich Foundation (2001,2005, 2007) and the Rabinovich Tel Aviv Foundation for the Arts (2001-2007).  He was awarded first prize for composition from the Arthur Rubinstein International Society, making his composition the obligatory piano piece for contestants in the International Arthur Rubinstein Piano Competition (1998).  He is a laureate of Israel's Caesarea Edmond Benjamin de Rothschild Foundation (2001).  He received the Tel Aviv Prize for the Performing Arts – Rosenbloom Prize (2002) and Israel Theater Prizes for the most significant event of the year for his opera Alpha and Omega which was commissioned by the Israeli Opera (2002) and composer of the year (2004).  He won the Prime Minister's Prize for composition (2003).  His sponsors include The Safra Group in Switzerland, Motorola Israel, Mr. Murray Pepper (Los Angeles), Mrs. Susan Rose (New York City) and the prestigious Soli Deo Gloria Foundation in Chicago. Gil Shohat has been a chosen artist of the Israel Cultural Excellence Foundation (IcExcellence) since 2004.  Shohat's pro bono work includes charity recitals for organizations such as Latet and ESRA, as well as service on the board of the Israel Lottery's Arts Council (Mif'al Ha-Payis).