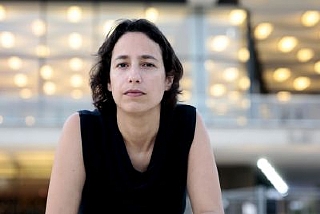 Ronnie Reshef, composer, born in Israel. She creates in various genres including concert
concert music to Off-Broadway musicals, music for film and television and concentrating on works for the theater. Her music was performed by the Atlanta Opera, The Secret Opera, The Qube Quartet, Thompson Street Opera, the Israeli Chamber Project, Hartford Opera Theater, the Revolution Orchestra and the Israel Symphony Orchestra. She has composer four operas (When He Was Good, Something to Live For, The Lifespan of a Fly, Requiem for the Living), a musical (Conspiracy: A Love Story), two song cycles, chamber music and music for scores of shows and films including for the Gesher Theatre, Nisan Nativ Acting Studio, Tmuna Theatre, the Habimah National Theatre, the Julliard School of Music and others. Some of the shows for which she composed the music are French roulette, Hertzel Said, Bats without Wings, Summer in Marienbad, The House of Bernarda Alba and others. Recent highlights include Childhood Sketches, commissioned and premiered by the Thelma-Yellin wind band. Fellowships and workshops include American Opera Projects’ Composer and the Voice program, BMI’s Lehman Engel Musical Theatre Workshop and a Yaddo residency. Reshef serves as faculty at The Jerusalem Academy for Music and Dance and The Ono Academic College. She holds a Doctoral degree from Manhattan School of Music.