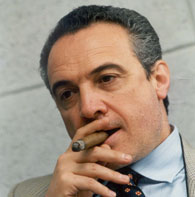 Giancarlo del Monaco-Zukerman was born in Italy, the son of the famous tenor Mario del Monaco. He made his debut as a stage director in 1964 in Siracusa (Italy) with Samson et Dalila (Saint-Saens), starring Mario del Monaco. He started his career in Germany as assistant to Wieland Wagner, Günther Rennert and Walter Felsenstein before assuming the post of principal stage director in Ulm from 1970 to 1973 where he staged some 15 productions. He was General Manager of the Macerata Festival (Italy) from 1986 to 1988 and the General Manager of the Opera der Bundesstadt Bonn from 1992 to 1995. From 1997 to 2001, Giancarlo del Monaco was the General Director of the Opera House of Nice. Del Monaco is one of the most important and sought after opera stage directors of his generation. He has staged productions among other opera houses, in Barcelona, Berlin, Bologna, Bregenz, Buenos Aires, Catania, Hamburg, Los Angeles, Madrid, Munich, La Scala in Milan, Montpellier, Naples, the Metropolitan Opera in New York, Paris, Rome, Venice, Washington, Vienna, Zurich and many others. In 1991, he was invited to stage La fanciulla del West (Puccini) at the Metropolitan Opera. This was followed by Stiffelio (Verdi), Madama Butterfly (Puccini), Simon Boccanegra and La Forza del destino (Verdi). All of these Met productions were filmed and internationally broadcast.

At the Israeli Opera he directed:
Don Carlo (2018)