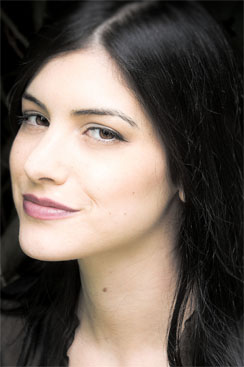 Dana Marbach was born in Israel. She was a member of the Israeli Opera's Opera Studio. She has performed Zerlina in Don Giovanni (Mozart) in Palermo. She performed Aeneas in Dido and Aeneas (Purcell) in Tel Aviv and Stuttgart and both Susanna and Barbarina in Le nozze di Figaro (Mozart) with the Haifa Symphony Orchestra in a special Opera Studio production. She has received the AICF and the Ronen Foundation scholarships. Among her most recent stage engagements: the roles of Joy, The Lady, Shepherdess in Don Quixote (Purcell, Eccles) in the Cite de la Musique, Paris; and those of Belinda and Peace in a world exclusive production of Dido & Aeneas 1700 (Purcell, Eccles) - both productions with the New London Consort under the baton of Philip Pickett. She also sang the roles of Diana and Dori in La Pastorale a Sanssouci - a fully staged production of solo & duo baroque cantatas with the I Confidenti ensemble, performed in the Schlosstheater im Neuen Palais, Sanssouci, Potsdam.