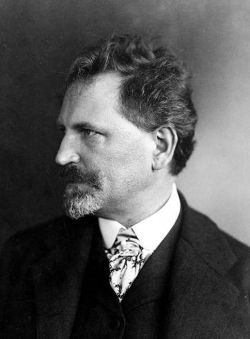 Adolfo Hohenstein was born in Russia in 1854 and lived in Italy and Germany. He was a painter, advertiser, illustrator and designer and is considered the father of the Italian poster art. In 1879 he began working as a designer for La Scala in Milan and then became the artistic director of the graphical part of the Ricordi publishing company. He has designed the publicity campaign of Campari, Buitoni as well as numerous postcards and covers of many books and booklets. In 1900 he moved to Germany where he died in 1928. He has designed costumes, sets and props for many productions in Italy including the world premieres of Le Villi, Edgar, Manon Lescaut, La boheme, Tosca (Puccini), Falstaff (Verdi), Loreley, La Wally (Catalani), Iris (Mascagni) and others.