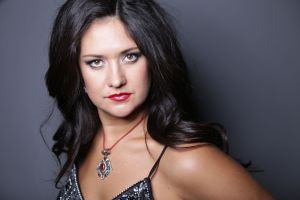 Agunda Kulaeva was born in Russia. Her repertoire includes the title role in Carmen (Bizet), Lubasha in The Tsar’s Bride (Rimsky-Korsakov), Amneris in Aida, Eboli in Don Carlo (Verdi), Sonia in War and Peace (Prokofiev), Zita in Gianni Schicchi (Puccini), Ratmir in Ruslan and Lyudmila (Glinka), Konchakovna in Prince Igor (Borodin), Olga in Yevgeni Onegin, Polina in Pique Dam (Tchaikovsky), Marfa in Khovanshchina (Mussorgsky) and others. She performed at the Bolshoi in Moscow and in the opera houses of Sofia, Berlin, the Arena di Verona, Vienna, Hong Kong and others. This is her Israeli Opera debut.