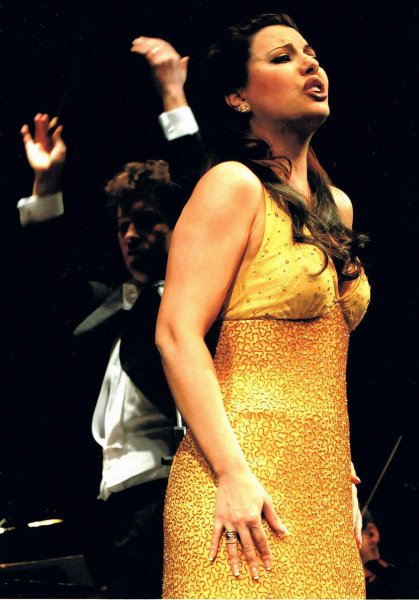 Hrachuhi Bassenz was born in Armenia. Her repertoire includes the title roles in Norma and Zaira, Elvira in I Puritani (Bellini), Emilia di Liverpool (Donizetti), Violetta in La traviata, Desdemona in Otello, Amelia in Simon Boccanegra, Leonora in Il trovatore (Verdi), Micaela Carmen (Bizet), Teresa in Benvenuto Cellini (Berlioz), Fiordiligi in Cosi fan tutte, Contessa in Le nozze di Figaro, Donna Elvira in Don Giovanni (Mozart), Mimì in La Bohème,  Liu in Turandot (Puccini), Rosalinda in Die Fledermaus (Strauss), Corina in Il viaggio a Reims, Anai in Moise et Pharaon ( Rossini), Emilie and Fatime in Les Indes galantes (Rameau) and a highly praised Verdi’s Requiem masterpiece. Her impersonation of Valentine in Meyerbeer’s Les Huguenots was live broadcasted on BR Klassik and was nominated for a prize by Opernwelt magazine. She is a member of the ensemble in State Theatre Nuremberg and performed in the opera houses of Gelsenkirchen, Darmstadt, Bordeaux, Augsburg, Gdansk, Kassel, St. Petersburg, Moscow as well as in Swiss and Armenia. Mrs Bassenz sung at the Gala concert in her native Armenia, on the occasion of the official visit by the Pope Francis. She was awarded Komitas Medal from Armenian Ministy of Diaspora, Gold Medal from the Armenian Ministry of Culture and the prestigious Bavarian Award for the Advancement of the Arts from the Bavarian Ministry of Culture, being praised for her impressive stage presence and exceptionally wide repertoire. In the year 2017 she is making a house and a role debut as the title role in Adriana Lecouvreur (Cilea), at the Royal Opera House Covent Garden, under the baton of Daniel Oren.