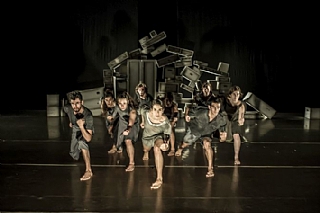 Yoav Cohen, video designer, was born in Israel. He graduated from the Video, New Media and Experimental Film Department of the Bezalel Academy as well as from the Sam Spiegel Film and Television School. He creates video art for theatre, ballet and music performances. He won the best video art design of the year prize for his design of Harold and Maude at the Beer Sheva Theatre. He created video art designs for numerous productions for many Israeli theatre companies including Habima, Beit Lessin, the Cameri, Beer Sheva Theatre, Orna Porat Theatre and others. He designed the video art for the productions of Murder in Dusseldorf, The House of Bernarda Alba in Kiel (Germany) and the musical Bharati 2 at the Grand Rex Paris. Hecreated video art for performances of musicians Ivri Lider and Shalom Hanoch. His short film Revenge won the first prize at the Soria Festival in Spain.