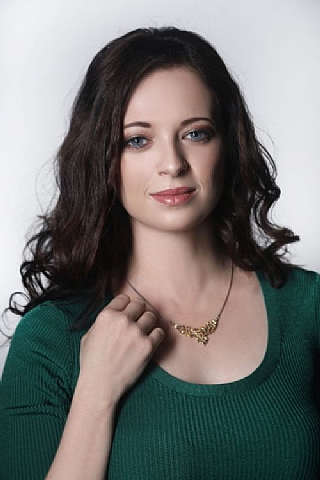 Galina Benevich, soprano, was born in Russia where she completed her voice studies before immigrating to Israel. She performed the role of Amina in La sonnambula (Bellini), Olympia in Les Contes d’Hoffmann (Offenbach), Violetta in La traviata, Gilda in Rigoletto (Verdi), the Queen of the Night in Die Zauberflote (Mozart), Clorinda in La Cenerentola (Rossini), Xenia in Boris Godunov (Mussorgsky), Giulietta in I Capuleti ed in Montecchi (Bellini), Musetta in La boheme (Puccini), Frasquita in Carmen (Bizet), Cunegonde in Candide (Bernstein), Adele in Die Fledermaus (J. Strauss), the Fairy Godmother in Cendrillon (Massenet), the title role in The Snow Maiden (Rimsky-Korsakov) and other roles. She performed in many concerts in Russia where she also won prizes in several singing competitions. She performed in many concerts with the Raanana Symphonette Orchestra and other musical ensembles. She received the Eli Leon scholarship. Galina Benevich was a member of the Israeli Opera's Meitar Opera Studio where her repertoire included the Queen of the Night and Papagena in Die Zauberflote (Mozart), the Sand and the Dew Fairies in Hansel und Gretel (Humperdinck), Clorinda in La Cenerentola (Rossini), Suor Genovieffa and Suor Osmina in Suor Angelica (Puccini) and other roles.She is a member of the ensemble of the Wroclow Opera in Poland and performed also in Bremen and Munich.

Her roles at the Israeli Opera:
Macbeth: an apparition (2016)