The State Choir of Latvia

The State Choir of Latvia

The State Choir of Latvia was founded 70 years ago. Its repertoire is based on the major works from 18th – 20th century European classical music but also adds to its repertoire innovative compositions of various genres, starting with film music records and ending with numerous world premieres. In recent years, the choir has cooperated with the leading symphonic orchestras around the world including The Royal Concertgebouw Orchestra, The Bavarian Radio Symphony Orchestra and The London Philharmonic Orchestra and has also performed with orchestras in Germany, Finland, Singapore, Israel, the USA, Estonia, Russia and others. The choir has sung with any leading conductors including Mariss Jansons, Andris Nelsons, Neeme Järvi, Pavo Järvi, Kristian Järvi, David Zinman, Vladimir Jurowski, Valery Gergiev, Zubin Mehta, Vladimir Fedoseyev, Tõnu Kaljuste, Simone Young and many others. The choir has many recordings to its credit. Since 1997 the artistic director and chief conductor of the choir is Maris Sirmais and general manager is Maris Oslejs. 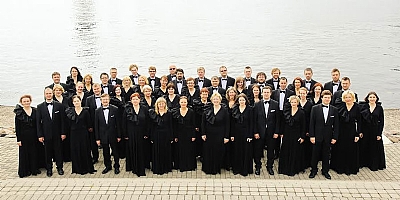