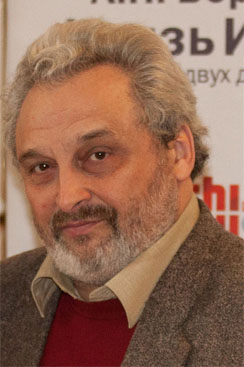 Yuri Alexandrov, director, was born in Russia. Since 2009 he has been the head of the music direction department at the St. Petersburg Conservatory. He has been honoured with the Kazakhstan State Prize, the Golden Mask Prize and the Golden Border Light Prize, St. Petersburg’s highest theatrical award. He graduated from the Leningrad State Conservatory with a degree in piano and musical theatre direction. In 1978 he started working as a director at the Mariinsky where he directed Il campanello di notte, Don Pasquale (Donizetti), The Story of Kai and Gerda (Banevich), Don Giovanni, Le nozze di Figaro (Mozart), Mavra (Stravinsky), Mazeppa (Tchaikovsky), Semyon Kotko (Prokofiev), Aida, Don Carlo, Otello (Verdi) and other operas. He has staged over 200 opera productions in different opera houses in Russia and abroad, including Khovanshchina (Mussorgsky) at the Bolshoi, Turandot (Puccini), Lucia di Lammermoor (Donizetti) in Kazakhstan, Don Giovanni (Mozart) at the Arena di Verona, Werther (Massenet) in Ankara and others. In 1987 he founded the Chamber Music Theatre in St. Petersburg. This is his first work at the Israeli Opera.