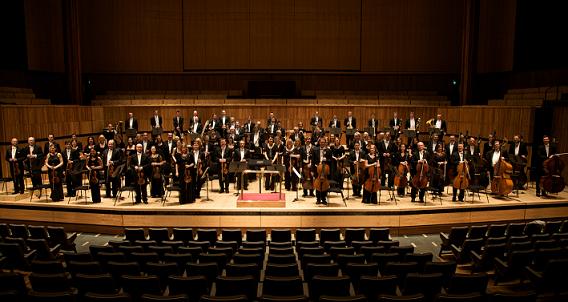 Acknowledged as one of the UK’s most prodigious orchestras, the Royal Philharmonic Orchestra (RPO) enjoys an international reputation for bringing audiences worldwide first-class performances and the highest possible standards of music-making across a diverse range of musical repertoire. This was the vision of the Orchestra’s flamboyant founder Sir Thomas Beecham, whose legacy is maintained today as the Orchestra thrives under the exceptional direction of its new Artistic Director and Principal Conductor, Maestro Charles Dutoit.

Since its formation in 1946, the Orchestra has been directed by some of the world’s finest conductors, most notably Rudolf Kempe, Antal Doráti, André Previn, Vladimir Ashkenazy and more recently Daniele Gatti. Other high-ranking conductors who regularly take the podium include Pinchas Zukerman as Principal Guest Conductor, Grzegorz Nowak as Principal Associate Conductor and Dirk Joeres as Permanent Guest Conductor. Daniele Gatti continues his association with the Orchestra as Conductor Laureate.

The Royal Philharmonic Orchestra is London-based and performs a prestigious series of concerts each year at Southbank Centre’s Royal Festival Hall. The Orchestra’s 2010-2011 series features internationally renowned artists including Charles Dutoit, Mischa Maisky, Sarah Chang, Martha Argerich, Pinchas Zukerman and Daniel Hope. The Orchestra’s London home is at Cadogan Hall, in the heart of the capital, just off Sloane Square. This idyllic location offers an intimate atmosphere for concert-goers, with the current series of concerts featuring Dirk Joeres, So-Ock Kim and Natalie Clein. Complementing the concert series at Cadogan Hall, the Orchestra regularly performs in the magnificent Royal Albert Hall, presenting works of great magnitude in a varied series of concerts, ranging from large-scale choral and orchestral works to themed evenings of contemporary popular repertoire, all designed to suit the immensity of this historic and grand venue.

Within the UK, the Royal Philharmonic Orchestra is committed to offering an extensive regional touring programme, with established residencies in Croydon, Northampton, Lowestoft, Reading and Crawley. The Orchestra also gives regular performances at other venues throughout the UK, including forthcoming engagements in Ipswich, High Wycombe and Dartford. As an international orchestra, the RPO has toured more than thirty countries in the last five years. Recent tours have included performances in Japan, Egypt, Russia, Spain, Italy, Germany, the USA, a residency in Azerbaijan and a series of concerts in Shanghai with Charles Dutoit. The 2010-2011 season began with the Orchestra’s first annual residency in Montreux, Switzerland, featuring concerts with Charles Dutoit, Pinchas Zukerman and Sir Andrew Davis, with soloists including Yuja Wang and Jean-Yves Thibaudet. The autumn continued with concerts in Armenia and Germany, followed by a New Year tour of all the major cities in China with Pinchas Zukerman and a tour of the Canary Islands with Charles Dutoit in February. 2011 will see further concerts in France, Germany, Italy and the rest of Europe.

The Orchestra is also recognised for its artistic work through a vibrant and innovative community and education programme, titled RPO resound. Specially trained members of the Orchestra, alongside accomplished project leaders, provide comprehensive workshops where music is used as a powerful and inspirational force. RPO resound prides itself on working in a wide variety of settings, including projects connected with homeless people, youth clubs, the probation service and terminally ill children.

Frequently found in the recording studio, the Orchestra records extensively for film and television as well as for all the major commercial record companies. The Orchestra also owns its own record label and is proud to be the first UK orchestra to stream its entire series of concerts live from Cadogan Hall.