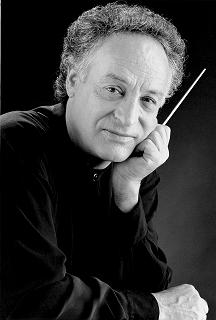 Yoav Talmi, conductor, was born in Israel. He was the first music director of the Israeli Opera when it was founded in 1985 and was recently named Conductor Emeritus of the Quebec Symphony Orchestra in Canada, an orchestra he led as Artistic Director and Conductor for 13 years. He is also the Principal Guest Conductor of the Israel Chamber Orchestra and Head of Orchestral-Conducting Program at the University of Tel Aviv's Buchmann-Mehta School of Music. In addition to his tenure with the Québec Symphony (1988-2011), Talmi held positions as Chief Conductor of the Hamburg Symphony (2000-2004), Music Director of the San Diego Symphony (1989-1966), Principal Guest Conductor of the Munich Philharmonic (1979-1980) and Music Director of the Arnhem Philharmonic, Netherlands (1974-1980). In Israel, Yoav Talmi served as Music Director the Israel Chamber Orchestra (1984-1988). He has conducted all the major London orchestras, the Berlin Philharmonic, Amsterdam’s Concertgebouw, the Symphony Orchestras of Vienna, Hamburg and Prague, the Philharmonic Orchestras of St. Petersburg, Oslo, Stockholm, Warsaw. Munich and Israel, the Orchestre National de France, Zurich’s Tonhalle, Rome’s Santa Cecilia, and numerous radio orchestras in Israel, France, Italy, Spain, Germany, Poland, The Netherlands, Belgium, Finland and Sweden. In Japan he has conducted the NHK Symphony, the New Japan Philharmonic and the Tokyo Symphony and in North America he has conducted among others the orchestras of Pittsburgh, Detroit, St. Louis, Houston, Dallas, Indianapolis, Montreal, Vancouver, Rochester and Seattle, as well as the Los Angeles Chamber Orchestra, the New York Chamber Symphony, the National Arts Centre Orchestra (Ottawa) and the Orchestra of St. Luke’s at Carnegie Hall.  He has many recordings to his credit and his recording of Bruckner’s ninth symphony with the Oslo Philharmonic won the prestigious “Grand Prix du Disque” in Paris. His two last recordings with the Québec Symphony of Debussy and Bach orchestrations won the Joker Prize by the Magazine Crescendo in Brussels. Yoav Talmi is also a conductor and his works, orchestrations, transcriptions and arrangements are published by various publications in New York, Quebec (Canada), Tel Aviv and Amsterdam. Talmi’s works that are frequently performed include his Elegy for Strings, Timpani & Accordion (Dachau Reflections), Suite of Israeli Folk Songs for flute & orchestra (or piano), Three Monologues for flute (or cello) solo,Dreams (Halomot) for choir a cappella and his many arrangements for flute ensemble and for flute and piano. Yoav Talmi is a graduate of the Rubin Academy of Music in Tel Aviv and The Juilliard School in New York, where he earned degrees in both composition and conducting with grants from the America Israel Cultural Foundation (AICF). He was a recipient of the Koussevitzky Memorial Conducting Prize at the Tanglewood Festival [1969] and the Rupert Conductor’s Competition in London [1973]. In July 2008, Yoav Talmi was awarded the ‘Frank Pelleg’ prize of the Israeli Cultural Ministry, for his high-level artistic achievements through many years of activity. In August 2008 he received the Quebec-City Medal, honoring his special contribution to the city’s 400 anniversary celebrations and on June 17, 2009 Yoav Talmi was named “Officer of the National Order of Quebec” - the most prestigious honor in French Canada.