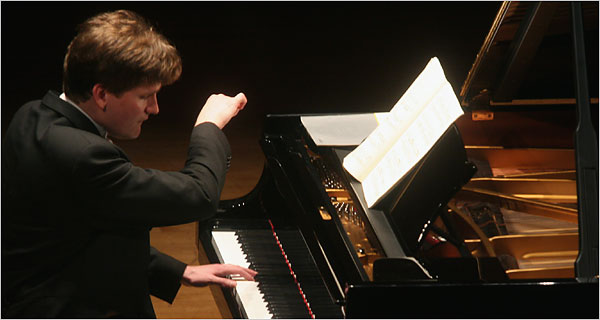 Olli Mustonen, piano, was born in Finland. He has a unique place on today’s music scene. As a pianist, he has challenged and fascinated audiences throughout Europe and America with his brilliant technique and startling originality. In his role as conductor, he founded the Helsinki Festival Orchestra and as a composer he forms part of a very special line of musicians whose vision is expressed as vividly in the art of recreative interpretation as it is in their own compositions. Born in Helsinki, he began his studies in piano, harpsichord and composition at the age of five. His first piano teacher was Ralf Gothoni. He subsequently studied piano with Eero Heinonen and composition with Einojuhani Rautavaara. As a recitalist he plays in all the world’s musical capitals, including Amsterdam, Berlin, London, New York, Tokyo and Vienna. At the heart of both his piano playing and conducting is his life as a composer. Mustonen has a deeply held conviction that each performance must have the freshness of a first performance, so that audience and performer alike encounter the composer as a living contemporary. In this respect he recalls Mahler’s famous dictum, that tradition can be laziness, yet he is equally suspicious of the performance that seeks only to be different. This tenacious spirit of discovery leads him to explore many areas of repertoire beyond the established canon. As a soloist, Mustonen has worked with most of the world’s leading orchestras, including the Berlin Philharmonic, Chicago Symphony, Cleveland Orchestra, Deutsches Symphonie-Orchester Berlin, London Philharmonic, Los Angeles Philharmonic, Philadelphia Orchestra, Philharmonia Orchestra and The Royal Concertgebouw, partnering conductors such as Ashkenazy, Barenboim, Berglund, Boulez, Chung, Dutoit, Eschenbach, Harnoncourt, Masur, Nagano and Saraste. This season he appears as a soloist with the London Symphony Orchestra under Valery Gergiev, the New York Philharmonic under Esa-Pekka Salonen, Frankfurt Radio Symphony Orchestra and the Royal Flemish Philharmonic. Increasingly, Mustonen is also making his mark as a conductor. Recent highlights include leading the Bern Symphony Orchestra, New Jersey Symphony Orchestra and the Queensland Symphony Orchestra; this season brings engagements with the Staatskapelle Weimar, West Australian Symphony Orchestra and the Melbourne Symphony Orchestra with whom he continues his complete cycle of Beethoven piano concerti as soloist / director. He also embarks on a recital tour of Italy with Steven Isserlis in early 2011 and finishes the season with a recital at the Edinburgh Festival. Olli Mustonen’s recording catalogue is typically broad-ranging and distinctive. His release on Decca of Preludes by Shostakovich and Alkan received the Edison Award and Gramophone Award for the Best Instrumental Recording. In 2002 Mustonen signed a recording contract with Ondine. His releases on Ondine include Bach and Shostakovich Preludes and Fugues; a disc of Sibelius’ piano works; Hindemith and Sibelius as player-conductor with the Helsinki Festival Orchestra; Mozart Violin Concertos with Pekka Kuusisto and Tapiola Sinfonietta; a selection of Prokofiev’s piano music; and most recently Rachmaninov Piano Sonata No. 1 and Tchaikovsky The Seasons. He has just completed recording all the Beethoven Piano Concerti as soloist / director with Tapiola Sinfonietta