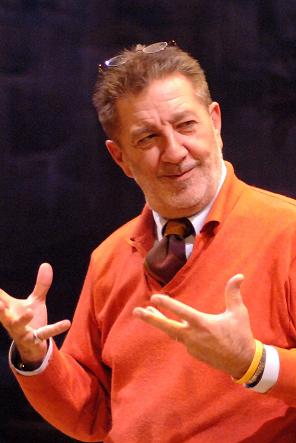 Stefano Mazzonis di Pralafera was born in Italy. He is the general and artistic director at the Opera Royal de Wallonie, Liège. While he was studying law and music in Rome he was already pursuing directing with the University Theatre in Rome. In 1983, he directed his first operas which quickly achieved great success and it was thus, as a director/designer, that he was invited to several Italian opera houses – the Comunale in Florence for the Maggio Musicale Fiorentino, the Theatre Ventidio Basso and the Theatre Sistina in Rome – and was called upon by numerous festivals in Italy and abroad, including the Festival della Perdonanza, the Pescara Festival, the Pesaro Festival, the Festival of the Mediterranean, the Bad Kissingen Festival and the Ludwigsburg Festival. Before his appointment as general manager and artistic director of the ORW, he was also artistic director of numerous festivals and of the Concerti Telecom, and superintendent of the Teatro Comunale of Bologna. A well-known figure in the audio-visual media, he has produced and presented numerous programmes on television and radio (RAI). In 2007, he directed three Intermezzi at the ORW, thus introducing three little masterpieces of the 18th century. The operas he then directed include Il matrimonio segreto (Cimarosa), Il barbiere di Siviglia (Rossini), La traviata, Otello (Verdi), Le Pays du sourire, Rita ou le mari battu and Il campanello di note (Donizetti). Recently he directed L’equivoco stravagante (Rossini) at the Festival in Basel and St. Moritz and Manon (Massenet) in Liège.

At the Israeli Opera he directed:
La bohème (2017)