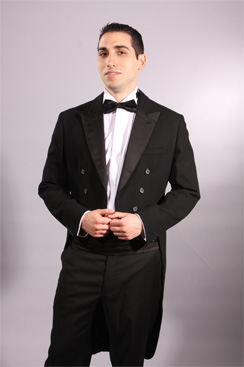 Nadav Inbar, tenor, was born in Israel. He graduated from the Jerusalem Rubin Academy for Music and Dance where he studied with Bibiana Goldental. During his studies he performed the roles of Tamino in Die Zauberflote (Mozart), Alfred in Die Fledermaus (J. Strauss) and Orfeo in L'anima del filosofo, ossia Orfeo ed Euridice (Haydn). He appeared in recitals and concerts throughout Israel in a varied repertoire and appeared as a soloist with the Jerusalem Symphony Orchestra, IBA. He has been a recipient of the America-Israel Cultural Foundation scholarships. Nadav Inbar was a member of the Israeli Opera's Opera Studio where his repertoire included Nemorino in L’elisir d’amore (Donizetti), Tamino in Die Zauberflote (Mozart), Prince Ramiro in La Cenerentola (Rossini) and Alfred and Eisenstein in Die Fledermaus (J. Strauss). He performed Ramiro in the Israeli Opera community production of Cinderella (Rossini) and Don Basilio and Don Curzio in the Opera Studio production of Le nozze di Figaro (Mozart) with the Israel Sinfonietta Beersheva.