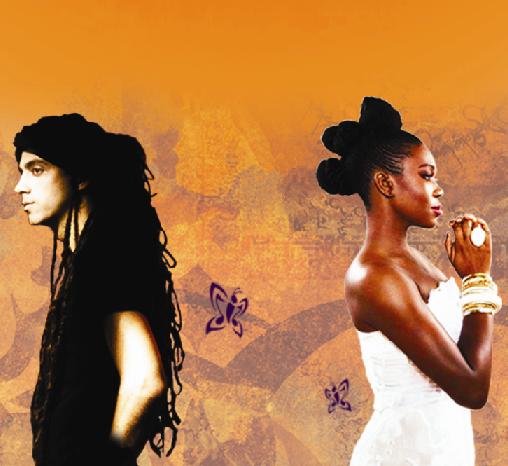 The final concert in the inaugural season of the Israeli Opera's World Music concert series will feature the Grammy award winner American artist India.Arie and Idan Raichel. Their concert, titled Open Door, is an internationally relevant project which defies genres and boundaries. They will perform new texts in English in arrangements made by Raichel in an acoustic concert accompanied by several American back up singers.
The album Open Door is bound to be released in June 2011 and the concert at the opera is a world premiere performance of the project before the artists embark on an international tour.
India.Arie first met Idan Raichel in 2008 when she visited Israel and have since appeared with Raichel in concerts all over the world including in front of President Obama and in the Noble Peace Prize Ceremony in Oslo. Their current project features more than 14 songs.

India.Arie says that the coming concert is "the most authentic musical experience in my life so far."
Idan Raichel says that "in the last year I had the great privilege to accompany India.Arie in her performances and also composed all her new songs which was a new challenge for me. In our coming concert she will sing for the first time all her new songs from our joint album. For me it is the first time that I go on stage with just new material and without the security that my project gives me and it is a real exciting event for me."

India.Arie was born in Denver, Colorado. She learned to play many instruments but started to study jewelry in a college where she studied guitar as well. Her first album, Acoustic Soul, was released in 2001 and featured a combination of soul music, hip hop, blues and funk and was nominated for seven Grammy awards. Her second Album, Voyage to India, was awarded two Grammy Awards.