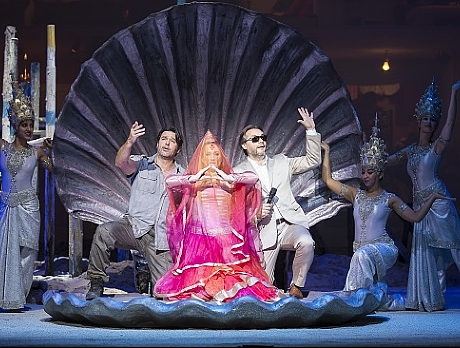 Act I
On the evening of the pearl fishers’ annual expedition in Ceylon, the people choose their leader. Zurga is elected. After many years, Nadir, a hunter, visit Zurga, his boyhood friend. As young men, the two were once in love with the same woman. Both swore not to pursue her so as not to endanger their friendship. Zurga sees a boat approaching: it must be the priestess whose task it is to keep the pearl fishers from harm during their expedition. The veiled priestess takes a vow of celibacy and loyalty for as long as she prays and sings for the pearl fishers on a rock.
Nadir and the priestess recognize each other: she is Leila, the woman the two men once fell in love with. Alone, Nadir sings of his love of Leila. However, his conscience plagues him because he has betrayed his friendship with Zurga. Nourabad, the high priest, brings Leila to the rock upon which she will sing to calm the sea. Nadir steals up to her and listens. Leila sings – but it is not clear whether her song n intended for the god or her beloved Nadir.

Act II
Nourabad leads Leila to a temple where she is to spend the night. Leila tells him a story of how once as a young girl she saved a fugitive from his enemies. As a sign of his gratitude, the fugitive made her a present of a necklace. Fearful of the night Leila yearns for the protective arms of Nadir. Nadir arrives but in order not to break her oath, Leila urges him to leave. Nadir stays and they confess of their love to each other.
Nourabad discovers the couple. Guards capture the fleeing Nadir and the tribe of the pearl fishers demands that the two lovers will be put to death. However, Zurga pardons them. At the command of the high priest, Leila removes her veil. Only now does Zurga recognize her as the woman he and Nadir once fell in love with. He immediately retracts his pardon. The two are to be executed.

Act III
Zurga is torn between anger and grief. He does not want to punish his friend and the woman of his dreams. Leila begs Zurga to let Nadir go and says that she is alone to blame for her breaking her oath. However, because this sacrifice is further proof of her deep love of Nadir, Zurga’s jealousy increases to a veritable fury and her rejects her pleadings.
Leila gives her necklace to one of the guards, asking him to take it to her mother after her execution. Zurga recognizes the necklace. In the dead of the night, preparations are under way to lead Nadir and Leila to the pyre. The lovers say their last farewells. Zurga cries out that a fire is raging in the camp and everyone rushes to the camp.
Zurga frees Nadir and Leila. He returns her necklace to her. Because she once saved his life, he now wishes to save hers. It was he himself who started the fire in the camp. They say goodbye to each other and Leila and Nadir escape. Zurga stays behind, alone, and waits for the revenge of the pearl fishers.

The curtain has just descended on the final scene of the opera. The hour is late. Nut the experience was riveting. This is the time to meet several of the performers. Come to listen and to speak. Ask questions. Meet the artists. A once in a lifetime opportunity to meet the artists who have just excited you on the stage. Opera Talkbacks takes place on the second level of the Opera House foyer and last around 30 minutes. Admission free. Opera Talkback takes place on several evenings in each production. Details can be found at the Israeli opera’s website.