The mountain that became a symbol of determination and heroism

People have streamed to Masada in the millions since the archaeologist Yigael Yadin first revealed its story in the 1960s. Masada is on the itinerary of virtually every tour group from abroad and continues to be a prime destination for Israeli youth groups and school groups, and for Israeli army units, some of which take their oaths of allegiance in ceremonies atop Masada. Who would not be overwhelmed by the power of King Herod, the controversial monarch who built lofty palaces here? Who could remain unmoved at the sight of the remnants attesting to the bitter end of the Jewish rebels who preferred death to Roman enslavement? 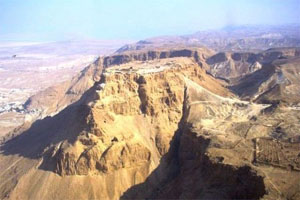 Masada is located on a solitary plateau in the Judean Desert, whose rugged slopes rise to a height of more than 400 meters above the Dead Sea. The combination of steep cliffs and desert surroundings provided the perfect natural defenses that attracted King Herod. But Masada was not just a strong-walled fortification; it was a royal fortress, with palaces both large and small and a sophisticated bathhouse.

The palace on Masada’s northern cliff, with its three stone terraces that seem to hang over the abyss, is the mountain’s most impressive structure, built by a technique that is amazing to this day.

Despite the grandeur and magnitude of Herod’s buildings, it seems that the most moving finds are the simple possessions left behind by the Jewish inhabitants, because it is through them that the end of the Great Revolt can be reconstructed. The great chambers of Herod’s palaces became command posts and public buildings. A building next to the northern wall – a stable in Herod’s day – became a synagogue, one of the earliest synagogues ever discovered, in use while the Temple still stood. The remains of the Roman siege system can still be seen around Masada’s base. They are among the most complete remains of Roman siege works anywhere in the world.

The extraordinary universal value of Masada led to its inscription in 2001 as a UNESCO World Heritage Site, to be protected and conserved for all humanity. The basis for the inscription included the fact that Masada symbolizes the ancient kingdom of Israel and its violent destruction and exile at the end of the first century CE.

The Israel Nature and Parks Authority invests major resources in conserving Masada and its magnificent historical saga, assisted in this task by world-renowned experts. Conservation and reconstruction of collapsed walls, of frescoes and mosaics and the rebuilding of ruined structures utilizes materials whose components are identical to those used in antiquity.

Projects to enrich the experience of the many visitors to Masada are continually underway at the site. The recently opened Masada Museum provides a dramatic visitor encounter that moves among historical periods, intertwined with archaeological finds on public display for the first time.