Tonio announces that the author wanted to revive the traditional customs of the commedia dell’arte, but the difference is that they are trying to show ‘a slice of life’, and the people you see onstage are flesh and blood.

Crowds welcome a troupe of actors arriving to town. Canio, the head of the troupe, invites everyone to come to their show at 11 that evening. Canio and Beppe head to the tavern for a drink, leaving Tonio alone with Nedda, Canio’s wife. She muses on the fierceness of his jealousy and dreams of her freedom. Not until her song is finished does she notice Tonio watching her. Clumsily he tries to declare his love for her, but she mocks him. When he tries to kiss her, she hits him. Screaming revenge, Tonio leaves her as Silvio, Nedda’s lover, appears. As they talk lovingly, Tonio sneaks in and overhears Nedda and Silvio’s plan to elope that night after the show. Tonio goes to fetch Canio.

When Canio returns, he threatens Nedda to reveal to him her lover’s name, but she refuses and Beppe has to restrain Canio, reminding him they have a show to perform. Left alone, Canio muses bitterly about the hard life of the clown who has to hide his pain behind his makeup.

The audience arrives, and the play begins. Harlequin (Beppe) serenades his beloved Colombina (Nedda), who knows that her husband Pagliaccio (Canio) will not return home until late. Taddeo (Tonio) appears and declares his love for her. Harlequin arrives, throws Taddeo out and the lovers sit down to eat. Taddeo returns to warn them that Pagliaccio is coming. Pagliaccio (Canio) comes in right on time to hear Colombina say to Harlequin the same words he heard Nedda tell her lover earlier that afternoon. Canio is unable to remain in character, and insists of finding out the name of Nedda’s lover. She improvises, trying to keep the play going, but Canio cries out he is not Pagliaccio any more. When she refuses once again to reveal her lover’s name, the jealously–mad Canio stabs her. As Silvio rushes from the audience, Canio stabs him as well. La commedia e finita.

Businessman Fefechts Schitz and his wife Tsesha eat well, but the aging couple are impatient to see their grownup daughter Schprachtzi get married and give them grandchildren. For her part, the daughter wants to get rid of her parents as expediently as possible, and longs to find a husband herself, a man upon whom she will be able to hang her life. Against the backdrop of rocketing meat prices Schprachtzi goes out to try her luck once more and meets Tcharchess, a former officer and tyro businessman. After making inquiries into the state of Fefechts’ business (“Two trucks and half a shovel dozer”), the potential bridegroom enters into crude bargaining with the father of the bride, and they reach agreement on the marriage terms. Fefechts sums up the haggling thus: “Romanian thief, I’ll turn you into a Persian rug”.

The intrigues begin immediately: Tcharchess schemes to get rid of the elderly couple, first the father and then the mother, in order to inherit their assets quickly, whereas they, with their daughter’s help, seek to deceive Tcharchess, and play one against the other. In this war of loyalties and interests Schprachtzi shifts from the old people’s camp to that of the young. The real war bursts into their life in the middle of the wedding. Tcharchess is called up for reserve service, “leaving a wife on the home front” to hoard food for emergencies. The war ends with a great victory: Tcharchess comes home, embarks on entrepreneurship, and within a short time realizes his ruthless capitalist “vision” by becoming a successful earthmoving contractor, rapidly overtaking his father-in-law Fefechts.

Schprachtzi becomes pregnant, and while her mother Tsesha hopes to become a happy grandmother, Schprachtzi mainly promises her lots of cleaning, washing, and so forth. The young couple enlists the mother to increase pressure on Fefechts. And indeed, the father, in the wake of a burst of gluttony, suffers a heart attack that almost totally paralyzes him. Tcharchess, who is deeply embroiled in loans and is keen to increase his credit, attempts to asphyxiate Fefechts in bed with a pillow in order to speed up the inheritance, but another war foils his plot. Tcharchess is called up again.

This time it is a different war that exacts the full price: Tcharchess is killed ,and when the despairing Schprachtzi, with Tcharchess' son in her womb, discovers how much she really loves her husband and realizes that she will have to start everything afresh, we return to the opening situation: they are preparing to eat and are grumbling about the price of meat. Towards the end of the opera, the ghost of the dead Tcharchess appears in the Schitz home – begs them to at least allow him to remain a sad memory. Fefechts, who is now completely paralyzed, miraculously gets to his feet and reassumes command of the family. He “accedes” to leaving the dead Tcharchess under the table to pick up scraps, and in a Churchillian speech announces that now he, Fefechts, will take the business in hand: “I shall go on in the earth, in the water, in the air, / I’ll double the capital… / I’ll double the wars… / I’m counting on the dead,

building on the dead, / the dead, the dead, the dead…” And before they all sit down at the table – for what remains apart from eating – Tsesha summarizes the affair: "If I didn't know we were living history, / I wouldn't be able to hold on."

30 June - 2 July 2020
The opera takes place on stage but the backstage hustle is a show by its own right. You are invited to enjoy an exciting tour, 90 minutes before curtain time, and sense the excitement on stage and in the soloists’ rooms, the make-up and wig rooms and the fantastic costume shop.
Read more
Towards opening 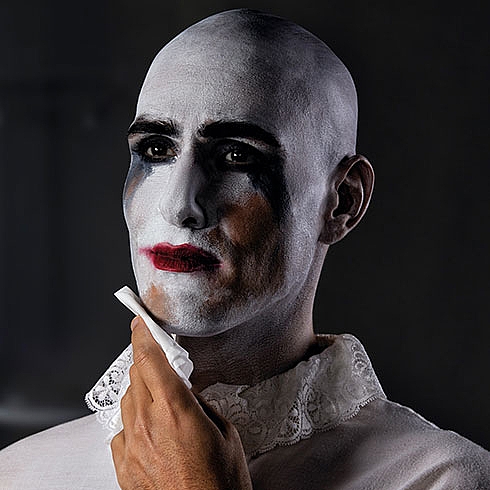 20 June 2020
A unique opportunity to meet the artists who created the production: Soloists, conductor, director and designers and to enjoy musical excerpts from the opera.