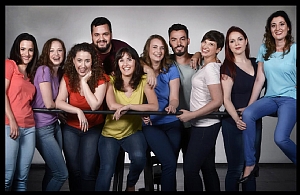 The actual curriculum of the Meitar Opera Studio is aimed at enlarging the experience of the participating singers and enabling them to gain musical and dramatic knowledge on a personal level and even more so as part of ensemble work.

At the end of first 15 years of the Opera Studio program, the 60 singers who were part of the program have between themselves performed around 130 roles in various Israeli Opera productions, side by side with participating in numerous concerts and performances in which they performed a very wide repertoire. Singers who have graduated from the Opera Studio program continue to perform in Israeli Opera productions on a regular basis as well as perform with orchestras all over Israel. All Opera Studio members performed most successfully in the Israeli Opera production of La traviata both in Tel Aviv (October 2001) and on a most successful tour to Wiesbaden, Germany (May 2003). In the fall of 2005, all members of the Opera Studio participated in a production of Dido & Aeneas which was performed in Tel Aviv and in Stuttgart. In the summer of 2010, all Opera Studio singers participated in the world premiere of Alice in Wonderland (David Sebba). Opera Studio singers also performed in concerts in Switzerland, Great Britain, Australia and South Korea. Notable Opera Studio productions include Le nozze di Figaro (Mozart) with the Jerusalem Symphony Orchestra, IBA as well as with the Israel Sinfonietta Beersheva and as La boheme (Puccini), Werther (Massenet), Die Fledermaus (J. Strauss), Don Pasquale (Donizetti), Dido and Aeneas (Purcell), Suor angelica (Puccini), The Telephone and The Medium (Menotti), Don Giovanni, Cosi fan tutte (Mozart) and others.

The Music Director of the Opera Studio is David Sebba.

We invite you to support young artists and develop a new generation of outstanding Israeli opera singers.

Opera Studio Members since its inception: