The Israeli Opera at Masada

Open air opera festivals under the vast canopy ofshining stars exist all over the world. Numerous historical and archaeological sites, such as the famousArena in Verona, Italy, host such festivals. Even moreso, opera festivals are also inaugurated in cities thatdo not feature such historical sites, like the floatinglake stage in the town of Bregenz, Austria. Each andevery one of these numerous festivals has its own set oftourism, social, economic, environmental and at timeseven political facets. The Israeli Opera has inaugurated its openair festival in Masada in June 2010 and now, in its thirdseason it has already becomea tradition. 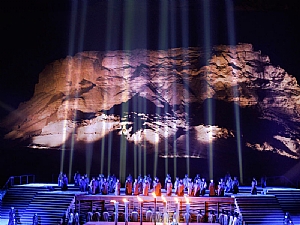 Having such a festival in Israel is not that obvioussimply because of the very complicated political,economic and logistic issues in this part of the world.Like any other festivals around the world, an entire infrastructure and production organization is neededto make this festival a reality. The principles that have guided the Israeli Opera in inauguratingour festival:

1. The Artistic PrincipleAn open air opera festival enables to presentproductions on a much larger scale than can be donein opera house in Tel Aviv. On the one hand thestage can be much bigger and showcase many moreperformers, as is indeed needed in such operas as Aidaby Verdi or Carmen by Bizet. The larger than lifeoperatic music enjoys a much bigger spectrum once itis performed under the stars and even more so by theMt. of Masada with its extra added emotional value.The size of the festival enables us to bring to Israelthe best opera artists, such as conductors, singers,orchestras and designers. Our challenge is the presentartistic mega productions without making them circuslike or just full of gimmicks. The sheer size also enablesus to expose opera as a genre to a much larger nationaland international audience than those who can cometo our opera house in Tel Aviv.

2. The Tourism PrincipleInternational opera festivals enjoy a wide and faithfulaudience who travels each summer all over the worldto enjoy the various under the stars opera productions.Tourists who usually come to Israel are first andforemost interested in the land which is holy to the threemonotheistic religions. They come to tour Jerusalem,Tel Aviv, the desert or the north of our country. Mostof these tourists do not add cultural event to their dietand are not exposed to the rich cultural palate of ourland. So it is somewhat absurd the Israeli orchestras,theaters, dance companies and visual artists performall over the world yet tourists who come to Israel do notenjoy this rich and varied culture experience. Creatinga cultural tourism attraction like our festival becomesa magnet that would no doubt draw culture buffs whotour the world also to our land. The State of Israel thatthe average tourist comes to know is different from thecountry they have learned to about from the media andfrom the world of politics. This positive normal imageof Israel begins a chain effect that eventually will bringmany more tourists to Israel, tourists who have yet toput Israel in their travel plans. Next time they comehere we believe that aside of our opera festival they willalso include dance, theatre or a museum exhibition intheir itineraries.

3. The Social PrincipleIt is very important to our opera to be relevant alsoin the social and national landscape of our land. Inour festival we have 2,500 workers who are responsiblefor the infrastructure and the operation of the festival,most of whom are residents of the Negev and the DeadSea area. The dress rehearsals of the festival provide uswith an opportunity to invite free of charge thousandsof periphery inhabitants who cannot afford purchasingopera tickets to enjoy the production. There is a widerange of education activities taking place throughoutthe festival for the inhabitants of the Dead Sea area, allof whom are invited to the dress rehearsal. In this waythe opera can expose itself to a larger audience that isnot familiar with the genre, when the actual culturalevent takes place in their home, in the newly erectedopera house in the desert.

4. The Environmental PrincipleAn open air festival, in the midst of the desert,by definition creates a dialogue with the naturalsurrounding where the goal is to use the nature with themountain, the desert and the sea becoming lead actorsin the performance. The festival glorifies the natureand intensifies it. We do not try to bring artificial sets tothe desert, on the contrary. We are enjoying the naturalset with all its majestic glory and making it a part ofthe production. At the same time the festival brings tothe public’s awareness the restoration and preservationof the Dead Sea, and choosing the Dead Sea as one ofthe new nature wonders of the world.

5. The Economic PrincipleOur festival enables a vast collaboration between thebusiness world and the cultural world as exists in manysimilar international festivals. Our collaboration inthese past two years with Discount Bank is an economicmodel that presents a triple dialogue between thebusiness company, the culture organization and theaudience. The initiative of Discount Bank opened thedoor for many other companies which also became part of our festival. The festival can also no doubt be an economic boostfor economic and business development in the Dead Sea area. In this way we will make our festivala cultural event that is a magnet for internationaltourists which creates culture and economics as wellas an environmental dialogue all within a very uniquecultural envelope.